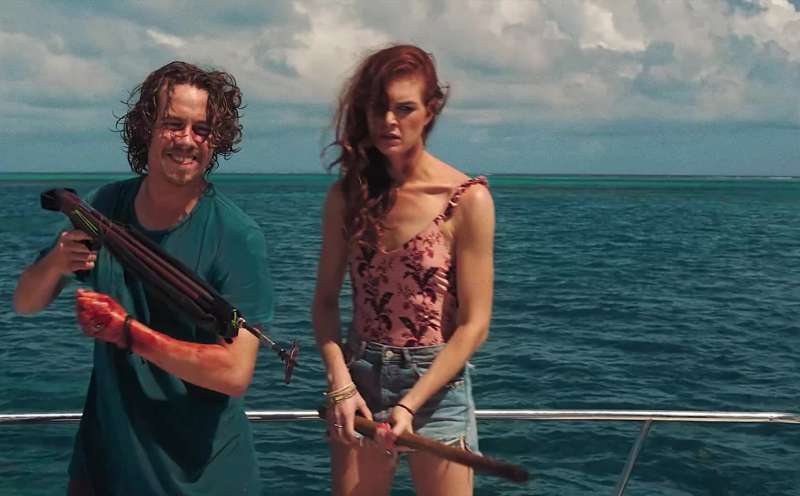 There were six European premières among the films at 2019's Grimmfest in Manchester, which had a focus on women in horror and opened with Abigail Blackmore's Tales From The Lodge.

The festival ran from 3 to 6 October.

Blood Vessel
Somewhere in the North Atlantic, late 1945. A lift raft adrift at sea, and in it, the survivors of a torpedoed hospital ship: With no food, water, or shelter, all seems lost - until an abandoned German minesweeper drifts ominously towards them, giving them one last chance at survival.

The Wretched
A defiant teenage boy, struggling with his parent's imminent divorce, faces off with a thousand year-old witch, who is living beneath the skin of and posing as the woman next door.

1BR
Terror in an apartment complex.

The Shed
Stan lives with his abusive grandfather and tries to protect his best friend from high school bullies. When he discovers a murderous creature has taken refuge inside his tool shed, he tries to battle the demon alone until his bullied friend discovers it and develops a far more sinister plan.

Artik
A comic book obsessed serial killer teaches his son how to get away with a series of brutal murders until the boy befriends a mysterious man who threatens to expose everything.

Rabid
A remake of David Cronenberg's original, in which experimental plastic surgery leads to a sudden outbreak of disease.

A Serial Killer's Guide To Life
A frustrated thirtysomething woman stuck in a small seaside town meets a charismatic life coach who promises to transform her world with alternative therapy - and who is also a serial killer.

Harpoon
Rivalries, dark secrets, and sexual tension emerge when three best friends find themselves stranded on a yacht in the middle of the ocean under suspicious circumstances.

Satanic Panic
A pizza delivery girl at the end of her financial rope has to fight for her life - and her tips - when her last order of the night turns out to be high society Satanists in need of a virgin sacrifice.
A-Z of Grimmfest 2019 reviews >>>

Adapt to survive
David Marmor on locations, violence, rental nightmares and 1BR
Against the odds
David Marmor on how neither fire not disappearing actors could stop him making 1BR
Messing about in boats
Rob Grant on superstition, Harpoon and the art of keeping still
The magpie
Lauren Ashley Carter talks fight scenes, troubled characters, animal inspiration and Artik
Getting under the skin
The Soska sisters on Rabid, female relationships, #MeToo and being back at Frightfest
Challenging images
The Soska sisters on David Cronenberg, plastic surgery, transhumanism and remaking Rabid
A woman's story
Pollyanna McIntosh on Darlin’ and the wildness in all of us