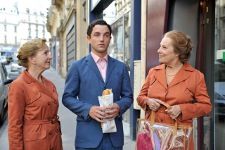 The French Film Festival gets the keys to the door as it celebrates its 21st edition in 2013, running from November 7 to 30.

The festival opened with a gala screening of Sylvain Chomet's first live action film Attila Marcel. The director of The Illusionist was a guest of the festival.

Other highlights include screenings of a restored version of Lola, while in London, critic Phillip French will introduce his favourite French film, Bertrand Tavernier’s Life And Nothing But.

Attila Marcel
A man rendered mute by childhood trauma finds a road into his memories with the help of a neighbour.

Love Is In The Air
A man and the woman he split up with three years previously meet by chance on a plane.

The Day Of The Crows
Animated story of a boy who leads a wild existence deep in the forest until the day he discovers civilised life in a neighbouring village and meets a girl who lives there.

Les Apaches
A casual theft leads to trouble for a group of young friends.

Marius
Love story between a would-be sailor and his childhood friend.

Camille Claudel, 1915
Confined to an asylum, the former mistress of sculptor Auguste Rodin tries desperately to obtain a release.

Young & Beautiful
Portrait of a 17-year-old, who sells her body for cash.

Me, Myself And Mum
A comedy of misunderstandings.

Tonnerre
A musician enters into an amour fou with a younger woman who is on the rebound.

Lovers
An exhausted women tries to rebuild her life but finds obstacles intentionally placed in the way of her happiness.
A-Z of French Film Festival 2013 reviews >>>