Eye For Film >> Features >> The story of Wild Bill

The story of Wild Bill

Dexter Fletcher on the father/son dynamics, character-driven drama and classy cast of his directorial debut. 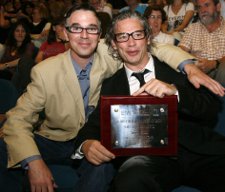 Wild Bill director Dexter Fletcher knows a thing or two about child actors, having been one himself, making his big screen debut back in 1976 as Baby Face in Alan Parker's Bugsy Malone. Now almost four decades later, he also knows what it is like to grow up on screen, having progressed in the public consciousness through teen drama Press Gang and onto adult roles on film and TV such as Lock, Stock and Band Of Brothers. It seems appropriate then, that his debut directorial features Will Poulter, one of British cinema's young bright lights, who here - after childhood roles in the likes of Son Of Rambow and Voyage Of The Dawn Treader - begins to really make the transition from child to man, complete with full-on onscreen snog.

Catching up with Fletcher after the film has just had its world premiere to a standing ovation from an enthusiastic San Sebastian Film Festival crowd, it's easy to see why audiences at Q&As respond to his natural warmth, down-to-earth outlook and general sense of positivity. Talking about the performances he got from his cast, he says that working on a script that involved youngsters was important to him and that he was "very conscious" of the fact that it is not just the characters of Dean, played by Poulter, and Jimmy, played by newcomer Sammy Williams, who are coming of age but the actors who play them as well.

"It was something I wanted to do," he says. "I wanted to work with young actors and explore what that was like from a grown-up point of view. Will is going through that really interesting phase of going from being a boy to being a young leading man. It was a leap that he had to make and he knew that when he read it. He said, 'I've got to do this part.' He was up for it.

"He's a discerning, caring, considerate young man now. I wanted a story that had young actors in it because that's a tough time to go through and I wanted to work through that with him. Not in the sense of, 'Hey, I've been there, kid.' But I felt I had some kind of a handle on it. Will and I are good mates, I think he'd say the same, that he and I are close. And the same with Sammy, he's 13 going on 27, he's smart."

Poulter and Williams certainly repay Fletcher's faith in them, with naturalistic performances and plenty of chemistry as two brothers who have been left to fend for themselves after their mum has swanned off to Spain without them. Dean has taken on the father role in the household, quitting school in favour of working as a builder on the nearby Olympic Games site, but he doesn't really have the experience to know how to handle the increasingly wayward Sammy, who is falling down the same sort of slippery slope that landed their real dad behind bars.

Into their difficult but functioning lives comes dad Bill (Fletcher's long-time pal Charlie Creed-Miles), fresh from the nick and not in the market for taking on responsibility. But despite Dean's resentment, he needs his dad to stick around to stop social workers splitting him up from Sammy. What evolves is a story that chiefly concerns the difficulties of father and son dynamics and is about both learning to grow up and face responsibility, whatever your age, and of learning when it's okay not to be the one who has to look after everyone else.

The father son aspect is even enshrined in the film's dedication - to Fletcher's own dad, which he describes as an "emotional dot" at the end of the film, to accentuate his aims.

"My dad unfortunately died in May [2011]," he says. "Obviously, he was my dad, I loved him very much and he was influential in the kind of films I watched as a kid.

"He was always a big Mike Leigh fan and so that was stuff that we would sit and watch together. And it's a film about fathers and sons - they're always complex relationships in my experience, whether it's father/son or mother/daughter. I'm one of three boys and we all loved our dad. Unfortunately he succumbed to cancer but he did see an early, early cut of the film. And, of course, it's always a difficult thing for you as a son to get a compliment out of your dad - it's just not the way it works, unfortunately - but I wanted to make a film that I thought that he would like as well as one I would like.

"And I suppose he's responsible in a lot of ways in the influence that he made. I still like Mike Leigh films so there's an element that this film has a lot of realism to it and I was quite conscious of that. Hopefully Bill connects in a human way because it's about parent/child relationships - but that's why the dedication is important. It's about dads and learning to communicate with them and I don't know if I did that with my dad but he and I both like this film. Of course, my dad was proud of me no matter what I did."

There's certainly plenty to be proud of here, as Fletcher avoids all the usual council-estate cliches and plot-hearvy violent, in-your-face grit that we've come to associate with London working-class films. Instead, he creates something that is altogether more character-driven and emotionally satisfying. He says he was keen to get away from the "one-dimensional characters that are a million miles away from the truth".

"No one is one-dimensional," he adds. "Of course on the surface they are all are and these gangster flicks are all about, "Oh, I could do you," and all that. It's all well and good and people buy it and want to watch it. But I very consciously wanted to make a film that didn't just fall into those traps of the stereotypical things. Because those films, you can watch them for 10 minutes, but after that, you're like, 'But I want more.' My aesthetic is, who are these people? What the fuck is going on? This a simple story with complicated characters as opposed to a complicated story with simple characters."

He is helped in fleshing out the roles by an excellent performance from Creed-Miles, who proves he has what it takes to carry a film here.

"I had Charlie in mind from the outset," says Fletcher. "I've known him for 20 years. I knew that Charlie was someone who was willing to take risks and who had a huge ability to turn that character round. I don't start him in a particularly likeable place but to turn this around by the end is big. I know him as a lovely warm and funny guy and that was something I was keen to hold on to. It was not a funny part but Charlie has a great ability to be funny. I didn't want this film to be kitchen sink. This is not a kitchen sink drama."

Working with fellow screen debutante Danny King on the script, Fletcher was able to draw on his own experience of London to create a believable environment. His grandmother, now in her eighties, has always lived in a Hoxton council flat and as a child he went to Anna Scher's drama school on the edge of the east end.

"Thirty or 40 years ago it was a rough place, not like it is now," he recalls.

These days, regeneration is the order of the day, with money flowing into the area in expectation of the Olympics later this year. This economic 'redemption' provides a neat parallel for the personal tale of Bill and his boys and it's something that Fletcher was conscious of, even though the Games background began as more of a happy accident.

"It was something that grew into being part of the film," he says.

"The story was written as a bloke who came home and found his kids living alone. So the script was written and it wasn't set anywhere specific. Then I talked to my cousin - she worked in TV production - and she said, 'I've just worked in a tower block in Newham that's empty, so if you need a flat that's a really good one'. So I went and saw it very early on, in May 2010, and there was the Olympics site being built. We could see it from the 16th and 17th floor. It kind of changed the gear.

"There's £5 billion being pumped into the area at the moment, everything's really changing, the old stuff is going and the new stuff is coming in and that really struck a chord with me. It's about a man who is trying to put the old stuff away and bring in the new him and there's all that tussle against that. So then I became really determined that it should be there. So on the next draft, I said, 'Danny, what about the Olympics?' It lit a little fire in him and when the next draft came back it had the kid working on the Olympic building site.

"What was lovely about this film was that we always knew where it was going to be shot. I could tell the DoP as well, so we knew the environment we were in and subsequent discussions and rewrites about lighting and where we were going to put the camera were really clear to us, not hypothetical. And we knew that the Olympics were going to be a symbol of regeneration but we knew that we wouldn't have to really sell it. We're not labelling it: Aren't we clever, we've got this really good metaphor... it's just there."

The cinematography work on the film is impressive and there are poetic moments, such as a paper aeroplane flight from a towerblock window, which Fletcher says is "just the right side of indulgent".

He adds: "Half the beauty of that shot is that it's an amazing piece of camera operating from George Richmond."

He goes on to praise Richmond for his excellent steadicam work throughout the film. He adds:"I didn't want to shoot things interestingly for interestingly's sake. I didn't want to do anything that was unecessary, like starting sideways and craning up or nicking angles just because you could do it. A steadicam shot is about a continuous moment."

Citing his influences as including There Will Be Blood director Paul Thomas Anderson, Black Cat, White Cat helmer Emir Kusturica and spaghetti western director Sergio Leone - "I'd say, 'Give me a Spaghetti.' And, boom, we come in close on Sean Pertwee's eyes," he says - it's clear that Fletcher has really got a taste for the shooting end of the camera.

"I would love to do it again," he says. "I've got another project with Danny King that I really like. It's very different, it's more fantasy based and comedy based. I want to do things that entertain - it's a film after all. Other people are talking about developing stuff. But first I want to see how Bill does."

With a San Sebastian youth audience award already under its belt and a British Independent Film Awards nomination for best achievement in production, Bill's prospects are looking good for its UK release on March 23.