Panos Cosmatos talks about the themes and influences of his sci-fi tale. 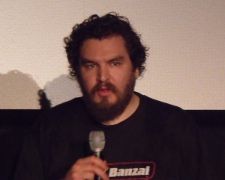 Beyond The Black Rainbow is the visually trippy debut from writer/director Panos Cosmatos. It tells the story of a woman (Eva Allan) trapped in a laboratory and her desire to escape from the sinister clutches of scientist Barry Nyle (Michael Rogers). The film premiered at Tribeca Film Festival and we talked to Cosmatos about the influences he drew on to make his film and some of its striking imagery.

Beyond The Black Rainbow is set in the early Eighties and has a very distinctive retro vibe, recalling work by John Carpenter, Stanley Kubrick and Andrei Tarkovsky among others. What inspired you to choose that period feel and how you did you approach those influences in order to create something that is distinctive and unique?

As a kid I was not allowed to watch violent or R-rated movies, but I would spend hours in the video store looking at the box covers and reading the descriptions on the back and then imagine my own versions of what I thought these movies would be like. If you don't have access to something you want, you create your own version of it.

The core inspiration for the film was to make one of those "imagined" movies. I've seen and internalised countless movies in my life, but I made a conscious decision not to go back and look at most of those movies from the past I suspected were inspiring this train of thought so that they would manifest in a more abstracted way. The movie is kind of a kaleidoscope of my memories, emotions and fascinations from that time.

Your film is visually very striking. What sort of budget did you have and how difficult was it to get funding for a film that has such a lot of experimental elements within it. Were there any problems you encountered while shooting as a result of the budget?

The budget, by industry standards, was a "micro-budget". It was self-financed with Tombstone DVD residuals [Tombstone was directed by Panos' father George P Cosmatos, who passed away in 2005]. After my father died, time seemed of the essence. I realised I could spend years hunting for financing or I could use the resources at my disposal to make something as I wanted to see it right away. I chose to act. Our shooting schedule was very short but we managed to pull it off by the skin of our teeth.

Did the fact that your dad is a film director and your mum [Swedish sculpter Birgitta Ljungberg-Cosmatos] an artist influence your choice of career and the making of this film?

Absolutely and completely. My mother and father haunt every frame of this film.

Can you talk a little about why you chose to make your central protagonist - and victim - mute. How difficult was it to cast the role?

People can often feel suppressed and controlled by their environments and those around them. Elena can speak, but she is afraid to because of what and who is around her and she can see no alternative. Ultimately she is the one in control, she just has to realise it. Eva Allan was my first choice, she instinctually understood how to approach the character.

The music is as distinctive as the visuals - and complements them. Why did you decide on that particular soundscape?

When I was formulating the movie the sound and score was as much on my mind as the images and story. I wanted the film to be a fluid and immersive audio visual experience. There are story elements in the movie expressed through "abstract" sound.

Although it is a genre movie, it is exploring much deeper themes, such as issues of control. Why did you choose to make a genre film to make your point?

Genres allow you to deal with themes in a much more visual, mythical and for me at least, satisfying way. Movies are like dreams and working within a genre enhances and enables that notion.

What are your plans for the future - do you anticipating making more genre movies or branching out in the direction of more experimental work?

If this movie is a Pink Floyd album, the next one will probably be a Slayer record.