Blessed, Together and Sir Ian McKellen picks up Donostia. 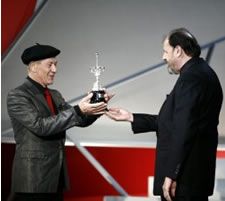 It seems portrayals of mummy dearest or deadliest are all the rage at the festival this year. After the examination of a drug addict's pregnancy courtesy of Ozon, the dark side of marternal obssession in Bong Joon-ho's Mother and the distinctly problematic parenting in Chloe and The Scouting Book For Boys, today brought yet more maternal machinations courtesy of Australian film Blessed.

Directed by Ana Kokkinos, this is a brave and impressively handled film which makes a virtue of its large ensemble cast to tell a series of - loosely connected - stories about a set of Melbourne blue-collar teenagers, first from their perspective and then from that of their mothers. Adapted from a stage play, Kokkinos has successfully left this behind to create an intricate drama, exploring the nature of the child/mother bond and asking whether being grown up means you are emotionally adult. Although initially seeming a mite confusing and stagey, as the children begin their day's wanderings through the urban jungle, the nature of their struggles and consideration of the halfway house between child and adult begins to coalesce. By layering on the maternal perspective later, we are able to see how easily the simplest of actions can be misinterpreted depending on your viewpoint and how those closest to us can still be strangers.

Kokkinos should also be praised for handling the, often, grim material in a manner which leads to catharsis and the unlikely emergence of hope. Although this is dealing with some tough issues, it is life-affirming at heart - although it will doubtless see many mum's nipping off to phone their offspring immediately afterwards.

If Blessed examines the manner in which a maternal bond can become fractured, Norwegian drama Together (Sammen) asks what happens when that tie is severed for good? Somehow, my presence for almost a week in Spain has managed to pay off, and I was able to watch it with only the Castillian subtitles and understand what was going on, although I realise you're going to have to take my word for that.

Notable for its phenomenal central performances from Fridtjov Saheim and young actor Odin Waage in his first screen role, it tells the story of a family wracked by grief. Astutely, director Matias Armand Jordal begins his first feature film, not with tragedy but with an insight into the workings of this tightly knit family - Kristine (Evy Kasseth Rosten), Roger (Saheim) and Pal (Waage). By giving us a window into their everyday world, once tragedy strikes and Kristine is killed, the pattern of grief which follows is rendered all the more palpable. As Pal takes what might be considered an adult approach to his mother's death, his father begins to have a mental tail-spin. In terms of plotting this is a simple story, but by keeping the narrative uncomplicated, Jordal is better able to more fully explore his characters' emotions and to take us on their journey. I'm sure we'll be hearing more from him.

I had hoped to see Yo, Tambien (Me, Too) this evening. Co-directed and co-written by Álvaro Pastor and Antonio Naharro, it tells the story of Daniel, a Down's syndrome man who - after acquiring a university diploma - finds himself falling in love with a 'normal' woman. I'm told it explores the way in which we tend to infantalise those with Down's and features some beautifully nuanced performances. Sadly, the screening was full, so I was unable to see it, here's hoping it turns up elsewhere. One thing I did catch, by accident, was Sir Ian McKellen walking the red carpet. He arrived, clutching a Basque beret that he would later wear onstage, to the strains of Soft Cell's Tainted Love and signed a raft of autographs for the welcoming crowd.

Although I wasn't in the auditorium, I made a point of checking out the footage of Sir Ian picking up his reward and the veteran actor looked quite overwhelmed by the reception he received. He went on to give a very touching, humble and heartfelt acceptance speech.

Smiling broadly, he said: "I don't know about you, but I think actors get far too much attention, they get far too much praise and they have far too many photographs taken of them - because actors really are just one in the team. That's why I'm not too fond of these prizes for acting. How can you compare one film's performance with another? You can't. We are not in competition with each other.

"But this award is different. It is not just for one performance but for many. It's for 50 years of acting, a whole career - almost a lifetime. Some actors act hoping for success, hoping for fame, hoping for fortune - and that's why there are so many disappointed actors in the world. Many of us, of course, act because we are not fit to do anything else. But I act, simply, to try to get better. If I'm in competition, I'm in competition with myself.

"I'm like a carpenter, always hoping one day to make the perfect chair and so, taking this home with me back to London, I promise myself one thing, that I will carry on acting. And I promise you one thing, too, I will be back in San Sebastian."