As the festival reaches its 10th birthday we celebrate its decade under the influence of the Age of Terror. 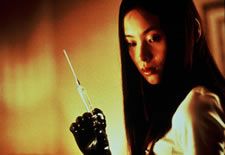 It is now a decade since FrightFest first filled the August Bank Holiday weekend with a concentrated barrage of genre features. Back in 2000, it took place in the amiably old-school Prince Charles Cinema which, with its plush blood-red interiors, its uncomfortable seats and its location on the margins of Leicester Square, seemed perfectly suited to a celebration of horror, SF, fantasy and other films on the mainstream's outer fringes.

By 2005, the Prince Charles could no longer accommodate the sheer number of people wishing to attend, and so FrightFest moved to the Odeon West End, reflecting the horror genre's own shift towards mass marketability (and, arguably, the soullessness that can sometimes come with this). Since then, the Prince Charles' original two-floor cinema has been 'downsized' into two smaller screening rooms, while the Odeon West End is itself scheduled for demolition - and so, to celebrate its tenth birthday in this changing landscape, the Film4 Frightfest (as it has been known since 2007) is moving once again, this time into the very hub of London's film universe, at Leicester Square's mighty Empire.

So it would seem that, over the course of these past ten years, horror has gone from being a freakish sideshow to hitting the big time – and during this period, the genre has, of course, had to keep up with the changing times, adapting, refracting and reducing the shifting anxieties of what has become known as the Age of Terror. All the past decade's major movements in horror have been represented over the years at FrightFest, so that its programmes document horror history in the making.

The very first event, back in 2000, featured the UK premiere of Takashi Miike's extraordinary Audition, the film that, along with Hideo Nakata's Ringu (1998), would introduce the joys of J-horror to these shores long before it was reproduced, remade and reimagined to death.

FrightFest has shown some of the very best J-horrors, including Nakata's hauntingly sad Dark Water (2002) and the Pang brothers' baroque Hong Kong variant The Eye (2002) – and has maintained a continuing allegiance to the most interesting genre films to come from Asia, such as Miike's The Happiness Of The Katakuris (2001) and Gozu (2003), Park Chan-wook's Hitchcockian revenge nightmare Oldboy (2003), Yasuo Inoue's Lynchian psychothriller The Neighbour No. 13 (2005), Bong Joon-ho's monstrous family tragicomedy The Host (2006), Na Hong-jin's urgent morality noir The Chaser (2008), not to mention the Mo brothers' blood-splattered Macabre, showing at this year's event.

Certainly the images that came out of Abu Ghraib and Guantánamo Bay have burnt themselves onto the public face of US foreign policy in the Middle East, but torture was not the only way for horror films to show the Bush era through a glass darkly. In America, the Noughties, much like the Seventies, have been characterised by lying Presidents, election tampering, prolonged and unjust wars abroad, oil crises and Middle Eastern terrorism, and so the horror cinema of the Noughties forged a tangible link with anxieties from the cinema of 30 years earlier.

This August, in keeping with this tradition, we can look forward to Lee Demabre's Smash Cut, starring such Seventies icons as David Hess (The Last House On The Left), Michael Berryman (The Hills Have Eyes) and the wizard of gore himself Herschell Gordon Lewis, while Dario Argento returns to his roots (and perhaps also to past form) with Giallo – and there is also Joseph Ruznak's Ozzie remake of Larry Cohen's 1974 cult hit It's Alive.

Still, thanks to a slew of remakes, the precious resources of Seventies horror have been all but exhausted in the Noughties, and there has, since 2006, been a notable drift towards the long-untapped reserves of Eighties-style slashers. Adam Green's Hatchet (2006), Gregory Dark's See No Evil (2006), Jonathan Levine's All the Boys Love Mandy Lane (2006), Roar Uthaug's Cold Prey (2006) and Stacey Edmonds & Doug Turner's I Know How Many Runs You Scored Last Summer (2008) all showed a reverence for the slice-and-dice of the Reagan era - while Jed Weintrob's Scar 3D (2007) marked yet another change/reversion to the in-your-face experience that horror can be. Perhaps this year's The Hills Run Red will prove to be the Scream-like injection of postmodernism that this most moribund of sub-genres needs.

Zombies, too, resurfaced in the Noughties to remind viewers that the past, like the dead, does not always stay buried, and so FrightFest 2005 highlighted the historical origins of this backward-looking trend by preceding the premiere of George A Romero's middling Land Of The Dead with a retrospective of the director's 'Holy Trinity' – including the film that induced the birth of modern horror, Night Of The Living Dead (1968).

Ever since, the undead have run amok through FrightFest's programmes, in Irish Romero tribute Dead Meat (2004), unofficial Romero prequel/sequel Day Of The Dead 2: Contagium (2005), Ti West's barnstorming debut The Roost (2005) and Gregg Bishop's zom-prom Dance Of The Dead (2008), while Romero's Diary of the Dead (2007) was introduced by the director himself at a special FrightFest Halloween all-nighter in 2007. This year, the Norwegian Nazi shufflers of Dead Snow, the no-budget London apocalypse of Colin, the burlesque dancers of Zombie Women Of Satan, the political un-rest of The Horde, and the Canadian radio-listening rabble of Pontypool will all keep the zombie line going, and perhaps even bring it some new blood.

Indeed, there is seemingly no recent trend in horror that FrightFest has failed to reflect. The camera-as-diegetic-device vérité of [Rec], Cloverfield and Diary Of The Dead was heralded by FrightFest presentations My Little Eye (2002), The Collingwsood Story (2002) and The Zombie Diaries (2006), and this year promises more shaky-cam shocks in Evil Things.

The festival has also championed from the start the emergence of Spanish-language horror, premiering long-time FrightFest friend Guillermo del Toro's The Devil's Backbone (2001) and Pan's Labyrinth (2006), as well as Juan Antonio Bayona's The Orphanage (2007), Rigoberto Castañeda's Km 31 (2007), Gonzalo López-Gallego's King Of The Hill (2007) and Nacho Vigalondo's TimeCrimes (2007) – and in 2009 it is the turn of Gabe Ibanez's Hierro, fresh from Cannes.

Of course, many of the very finest offerings from FrightFest over the years (Donnie Darko, The Machinist, Oldboy, Fear X, The Lost, The Signal, Day Watch, Inside, The Midnight Meat Train, Let The Right One In, Pig Hunt) have defied the sort of overschematic categorisation adopted here.

Some of this year's oddest sounding features, including the body horror of Tom Six's Human Centipdede, the psychological thrills (not to mention idiosyncratic indie casting) of Ti West's The House Of The Devil, and the multi-generic East End pandemonium of Phillip Ridley's Heartless, may well turn out to be the Festival's most arresting and memorable titles – and Christopher Smith's opener Triangle, Federico Zampaglione's Shadow, Niels Arden Oplev's Millennium and Christian Alvart's Case 39 all sound very promising too.

FrightFest has been there with the best and worst of this decade's genre cinema, holding up a mirror to all that has been discomfitting, unsettling and perturbing for the Noughties audience. It is too early to say where exactly this new era of Obama, recession and ecological catastrophe is taking us, but you can be sure that this very uncertainty will be finding nervous expression at FrightFest's decennial event.

So look over the 2009 programme, grab your tickets, and get ready to burn the candle at both ends in what promises to be a happy, if hopefully disturbing, birthday for the UK's biggest horror happening.

You can read our coverage of FrightFests past and present here.