Eye For Film >> Features >> Naomi Wolf on The End Of America

Naomi Wolf on The End Of America

The acclaimed author of The Beauty Myth discusses her new book and the documentary based on it. 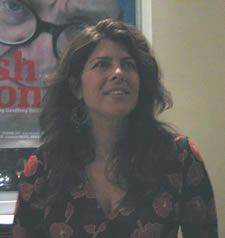 One can’t help feeling that a Republican victory in this week’s US election would have made Naomi’s task at Sheffield Doc/Fest somewhat easier. The best-selling author was here to talk about her book and to introduce the film version made by directing team Ricki Stern and Annie Sundberg.

In a series of impassioned arguments, Naomi makes the case that American democracy is under threat. Her visit to Sheffield was the latest stop in her mission to spread the message. But, given the timing of this visit, the big question hanging in the air was, “Surely the election of Barack Obama is going to change everything?”

Naomi dealt with this right away: “It would be so great just to think we’ve got a new guy and it’s over, the fight’s over. Not true! Unfortunately.”

The End Of America takes Naomi’s lecture, which she has been delivering around the United States and which can be seen on YouTube, and fleshes it out with interviews and archive clips, some of which do add weight to her argument, although others seem rather irrelevant.

Drawing parallels with dictatorships, including Nazi Germany and Mussolini’s Italy, Naomi argues that there are ten steps to fascism and “these ten steps are taking place in America now... The great dictators learn from one another. There is a blueprint for closing down democracy.” The steps include creating an internal and external enemy, the setting up of paramilitary groups, surveillance, secret prisons etc.

She quotes Bush after 9/11, “We will meet this threat with every method at our disposal.” And, “preventing mass terror will be the responsibility of presidents far into the future.” She gives examples of changes made to laws, including the apparent suspension of habeas corpus, the use of groups such as Blackwater (clips from New Orleans after Katrina where the company seems to have been given a free rein), and an ever increasing list of people to be stopped for extra security checks in airports (including the author herself).

But does all this add up to a fascist state? There is certainly plenty to be concerned about when the Land of the Free condones rendition and torture as legitimate weapons in the “war on terror”. But there’s something about the delivery of Naomi’s argument and the way it comes across in this film which provokes the response, “Well, just hold on a minute…”

One could ask who needs conspiracy theories when we have George W Bush. But in the best conspiracy tradition Naomi seems to be sifting for tenuous connections. Yes, there’s an echo of Heimat in Homeland Security, but is it really significant that there was once an organisation in Nazi Germany called Schwarzwasser and now the US has Blackwater? And I, personally, found the use of clips of Kristallnacht offensive. It’s just too easy to throw in this material as a way of prodding your audience.

Naomi began by saying she was glad to be in Sheffield with a politically aware audience, but after a few astute questions were posed, she accused us of being “combative”. Perhaps we were not quite the audience she had been expecting.

Asked: “Were you too easy on Congress?” Naomi told us that “the American Freedom Campaign, the grassroots democracy organisation which I co- founded along with several other people, is prosecuting not just Bush and [Dick] Cheney and [Donald] Rumsfeld and those who committed crimes at the highest levels of government… but certainly those Congresspeople implicated, for instance, in war crimes. They should be prosecuted as well. If that didn’t make it into the film, there was only so much time…”

Why was McCarthyism not included (in the film) when that seems to be an absolute manifestation of what she has been talking about?

Naomi’s hesitant reply was that this was included in the DVD. She was somewhat unclear about whether it is dealt with in her book, but went on to add: “When I speak about the McCarthy era, what I say is it’s a bad model. It’s not nearly serious enough.” She pointed out that measures taken in times of war, eg the internment of Japanese during WW2, have an end. “But the War on Terror has been defined as never ending in time and global in scope… so there’s never going to be an era when we can say this is over.”

If you take your ten points logically, the next step is a fascist take over. Is that what’s going to happen, or are we genuinely going to see regime change in America?

“This is the great question of the hour, and I hate to be Cassandra… I hope there are reporters here… The day after Barack won the presidency Bush deployed two brigades of US military to somewhere in the United States of America bringing his private army to 12,000 armed soldiers… to somewhere, to do something. He’s got 77 days to do it… All of these laws you see here are still on the books. There’s a massive profit motive for cold war weapons manufacturers to switch into surveillance and security technology. There’s money to be made from turning the United States into a police state.”

Naomi went on to say that while she believes Obama really wants change, as long as he, or any future president, has access to these strategy measures “while they are in the computer” it’s a very difficult thing to give up these powers.

There followed a question about freedom which Naomi seemed to take particular exception to, and then the session was abruptly cut short because the screening was running late.

There was just time for Naomi to make her now familiar call to arms, urging citizens to act to regain their freedoms, before she hurried away. There seemed to be a general feeling among the audience that while we agreed with so much that Naomi was saying, we were not too happy about the nature of the lecture.

The humanity of the story Melissa Haizlip on Ellis Haizlip, Black creativity and Mr. Soul!