Eye For Film >> Features >> The truth is out there

The truth is out there

As the latest X-Files film hits the big screen, we examine conspiracy theories in the movies. 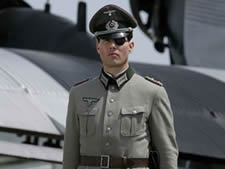 Hollywood deals in dreams, usually simple stories. Real life tends to be a little more complicated. History, sadly, doesn't have the benefit of focus groups, but there's definitely scope for rewrites. Where Greek dramatists could wave their hands and solve plot complications with a Deus ex machina, historians have fewer options. A Gordian knot of venality, incompetence and the limitations of bureaucracy can be traced, painstakingly, but sometimes it's easier to cut across it.

Conspiracy theories are simple explanations. Not literally - they're often dependent on esoteric interpretations of seemingly innocuous events, often requiring the laws of physics and chemistry to be bent or twisted, and assuming that organisations operate perfectly, that people act rationally or apolitically in times of great stress or laziness. But they cut through the problem: Why did it happen that way? They did it.

History isn't short of conspiracies, of course, nor Hollywood of films about them. There was the plot to assassinate Adolf Hitler, the so called “July 20” conspiracy which was to have triggered Operation Valkyrie, a contingency plan that would have given the army, rather than the Nazi Party, control over Germany. Tom Cruise will play the plot's leader, Claus von Stauffenberg in Brian Singer's film next year. Watergate's been committed to film in one form or another several times, and, of course, so have Guy Fawkes and the Gunpowder Plot. The essence of a conspiracy theory, however, is that it is an alternative explanation, particularly where “the Truth” is unsatisfying, unsettling, unpalatable.

Behind most moon landing conspiracies is the belief that going to the moon is so complicated as to be impossible. It was certainly difficult. It took years of effort, millions upon millions of dollars, buildings full of scientists and engineers, a peculiar breed of flyboy with The Right Stuff. Capricorn One closely followed one of those theories, technical inability combined with power politics. The other motives ascribed are various: covering up contact with aliens; naked greed; beating the Russians at any cost; protecting the legacy of a President who died before his time.

JFK's assassination has spawned hundreds of conspiracy theories. Oliver Stone gave one suggestion in the film of the same name, but there have been many others. Kennedy's shooting was shocking partly because it was the first assassination to be caught on film. Indeed, film is central to most of the theories: frame by frame analysis of the Zapruder tape, the vagaries of tape recording and playback all have had a part to play. At its heart is fear. If a great man can be felled by a lone gunman, who is safe? Add to that Lee Harvey Oswald's death, a rushed investigation, and it starts to look shaky, as long as you expect people to do their best at all times.

The Kennedy assassination had some odd after-effects, including Frank Sinatra's decision to withdraw his 1954 film Suddenly. The film had Sinatra as a genuinely terrifying hitman, a veteran hired to kill the President in a small town. Asked, “Don't you have any feelings?”, he responds “No, they were taken out of me by experts”, and he's genuinely believable. It's probably his best film, and very few people have seen it. It's in the public domain now and is sometimes screened on the upper reaches of the BBC in the small hours, and is well worth seeking out. The fact that Sinatra decided to take the film out of circulation is seen by some as proof of his involvement in the Kennedy assassination. Because, of course, the best way to hide the fact you've killed the President is to hide the film where you pretended to do it nine years before.

After JFK came RFK, an assassination that would have, in and of itself, given conspiracists grounds to be suspicious, not least because Sirhan Sirhan had no memory of the event. With his brother's death, of course, it seemed even more unlikely. After the Kennedys came Nixon, but Watergate was a genuine conspiracy. It didn't explain anything else, it was just an attempt at a cover-up. The hidden truth, of course, is a key element of conspiracy theories. Nixon was just trying not to get caught, but the “truth” has to be so big that an alternate explanation is required.

There's a variety of conspiracy movements out there, and as with most subcultures (up to and including Socialism) they tend to be riven with internecine squabbles over small parts of doctrine. Hollywood has itself moved into that territory on several occasions, from the overarching superconspiracy of The Parallax View to the President-controlling antics of The Manchurian Candidate. There was Mel Gibson vehicle Conspiracy Theory, where the government sought to get rid of a paranoid schizophrenic who had expounded some measure of truth to one of his taxi's passengers. Of course, he was secretly part of infamous mind control project MK Ultra, a comically ineffective mind control scheme of the CIA's that turns up again and again in other theories.

Then there was The X-Files. With its oddities and extremes, its willingness to cannibalise the folklore and urban legends of North America, and its central Alien-involving shadow government, it set out a cryptohistory that included everything that seemed interesting, and sometimes some stuff that didn't. Aliens turn up a lot in conspiracy theories too, though given how loudly NASA is shouting about water being found on Mars, and the chances of life on Europa, one can only imagine that they've hidden aliens from us in case we panic. Though judging by Close Encounters Of The Third Kind, it might be stop us from wasting mashed potato, or resurrecting Jean Michel Jarre's career. Of course, The X-Files was aware of conspiracy theories and conspiracism, so gave its fans heroes of their own: Frohicke, Langly and Byers, the Lone Gunmen.

They appeared in almost 40 episodes of The X-Files, had their own spinoff series, turned up in the X-Files movie. They even got merchandise. In a small crossover featuring Detective John Munch of Homicide: Life On The Street and the Law & Order titles, they also joined a TV conspiracy that suggests most television programs are being dreamed by Tommy Westphall. It's probably best not to go too far into it. You never know who might be watching. Beyond their fondness for conspiracy theories, the Lone Gunmen had another part to play. The pilot episode of their series, aired in March 2001, featured a plot to create a terrorist incident on American soil, in order to justify an invasion of a foreign country - using remote control to crash a plane into the World Trade Center.

The events of September 11th were shocking, and there's no shortage of theories out there to explain what “really” happened. At root, though, is a shared sense that it ought not to have been possible, that it could have been prevented. Indeed, it probably could have been, but signs were missed, things were misinterpreted, bad decisions were made. United 93 isn't a conspiracy theory movie, though Paul Greengrass has been accused of participating in the cover-up. South Park touched on people's need to believe in conspiracies; it's more comforting to believe in evil men manipulating the world than the uncaring sweep of fate. When you see the truth behind the world, sometimes there's nothing left to do but laugh. That's clear enough in Alan Moore's Watchmen, and it can only be hoped it makes it to the screen. From Hell merits mention as well, though it offered a theory that contained conspiracy; the whole point of a conspiracy is that it's an alternate explanation.

Film's actually a perfect medium for conspiracies, because what's seen on screen is the work of a huge number of people in the shadows. It's a story that's presented to the audience that seeks to explain, to tidy away loose ends, to entertain and divert. It's usually a single perspective on a series of events, one plot, one “truth”. Though history is different, not least because different people see it differently. Eye For Film's critics don't always agree, and we tend to see exactly the same films as audiences. Real life is sometimes confusing, often prejudiced or shaped by other perceptions. Reality can be scary, but rather than cling to fairy tales or conspiracies it's better to examine, to laugh; it's just sad that there's no way for film to convey this Rashomon-like complexity.

X-Files: I Want To Believe is out in cinemas across the UK from August 1.

Animosity Cousins The Croods: A New Age Deerskin A Good Woman Is Hard To Find Here After I Never Cry Kandisha Night Of The Kings Nowhere Special Off The Rails Plurality Riders Of Justice Summer Of Soul (...Or, When The Revolution Could Not Be Televised) Two Of Us The World To Come

Riders Of Justice Ailey The Boy Behind The Door Kandisha Nowhere Special Off The Rails The World To Come Cousins Here After Invisible Demons Deerskin Plurality A Radiant Girl The Sound Of Silence River Babi Yar. Context Animosity State Funeral Nobody The Hidden Life Of Trees