Eye For Film >> Features >> What floats your boat?

What floats your boat?

As Gore Verbinski's Pirates swashbuckler is released on DVD, we catch up with him. 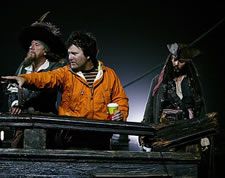 Gore Verbinski on the set with Geoffrey Rush and Johnny Depp

This week saw the release of Pirates Of The Caribbean: At World's End. Eye For Film caught up with director Gore Verbinski to find out about the power of the eye patch, the complexity of the maelstrom and how he feels about the continued adventures of Jack Sparrow.

Q: How much planning goes into “The Making of...” Extras and how deeply are you involved?

Gore Verbinski: It is really an issue of documenting the madness. There must be a million hours of digital video that the 'making of folks' are combing through. (Someone was on set videotaping every day.) They show me the cut footage and most of the time I just have this sort of Vietnam flashback moment and then say, 'sure why not?' I do believe the process of this production is just about as mad and bold an adventure as the narrative itself.

GB: These films are a different species completely. The process of making them has been such a wondrous and strange adventure, I think it serves as a form of entertainment itself. Nobody wants to show their dirty laundry, but ownership of these movies belongs as much to the audience as it does the filmmakers.

Q:Of all of the special features on the POTC: At World's End DVD, is there one featurette or one segment that stands out to you as being your favourite or the most interesting?

GB: Yes, the making of the Maelstrom gives you a small window into the complexity of creating and executing a sequence that has never been accomplished before. Months in planning and eight weeks of shooting required a synergy between stunts, camera, practical effects and visual effects. Day after day we were operating amid 100 miles per hour winds, cascading rain and debris, deafening cannon fire with 150 sword-wielding stuntmen battling across two undulating vessels on the largest gimbals ever constructed for filming. Although artificially created, practically speaking, we were filming a battle within a massive storm. I think the viewer will get a good sense of what everyone went through to bring this to the big screen.

Q: The Maelstrom scene proved to be a major success, but also offered up major effects obstacles. Was there ever a moment you didn't think it was going to work out?

GB: Definitely, the biggest issue hit us about eight weeks prior to the release. We were suffering from a scaling issue that seemed insurmountable. The physics of a whirpool this size overwhelmed the team at ILM. The path we were heading down was not achieving the desired results so it all had to be reworked. The initial rendered backgrounds were used as out of focus plates for closeups which bought us time by getting 100 or so shots in the pipeline and allowed us to completely rethink and re-render the maelstrom for all of the wide shots. This is the exact opposite of how you would normally go about producing this sequence. John Knoll and the team at ILM ultimately pulled it off, but it was a real nail-biter.

Q: Were they any shots that proved too difficult, that you just couldn't quite get right

GB: Most of the time the initial response from the producers or crew, when viewing the storyboards, was that this sequence was unachievable. But when you have the best in the business working with you, and you are willing to break apart each shot into it's components, the impossible eventually becomes a reality.

Q: Do you have any visual dreams that are technically still impossible to do but can be done in the near future?

GB: I think Hollywood invention has always been somewhat limitless. You may have relied on a bit of claymation, filmed lizards for dinosaurs, or depicted Chuck Heston parting the seas but what continues to change is execution: design aesthetic and photo realism continue to evolve. For me the limits have always resided with our imagination. The struggle is to conceive something unique. If you can achieve this, then the underlying concept or idea even badly executed, will always outshine the polished cliche.

Q: Where there times that you had to hold back Johnny Depp a little, or did you just let him do his Jack Sparrow thing?

GB: Johnny and I love pushing Jack as far as he can go, but we are also aware that keeping him unpredictable requires an constant oscilation between the dramatic and the absurd. So, it's both spurs and reigns - constantly.

Q: What is the movie scene that gave you much satisfaction once shooted?

GB: The scene with Jack and the crabs.

Q: I was particularly entranced with the “across the desert by crab” sequence - how did that come about?

I have always been fascinated by the work of Miyazaki. When we needed to get the Black Pearl back to the ocean, I thought, why are we limited to the rules of live action film making? Once those shackles are off, it is quite liberating. All sorts of ideas start to germinate. The crab is Tia Dalma's “motif.” Why not do something surreal and connected to her? Giving his escape a subtextual intention.

Q: How hard is it to keep the story in mind if your so busy with a lot of technology and computer generated images?

GB: Visual effects are a tool in the filmmakers toolbox. Once you become acquainted with them they cease to be distracting. I always try to keep story foremost in my mind while shooting.

Q: How was it working as a guitarist on the score?

GB: That was a blast. But my contribution is a pimple on the ass of a tick crawling along the ankle of a behemoth endeavor. Hans Zimmer and his entire team did all the work.

Q: What was it like when you finally got Keith Richards on set? Was he well behaved?

GB: Well behaved? Let's just say everything you have heard is true.

Q: You said on the bonus material that all of the sets begin with drawings on a napkin. When you now watch the finished movie, how close did the sets come to what was envisioned during the napkin drawing?

GB: The creative process is complex. I try to be specific and deliberate as I storyboard and pre-visualize the entire film. Yet, I am constantly aware that this process can make a film cold and clinical. I try to remain open to gifts that a little bit of randomness can provide along the way. The contributions of others is essential in creating that particular form of 'controlled chaos.' The napkin drawing is a starting point from which I encourage evolution. Most of the time the concept remains intact but execution shifts dramatically.

Q: What worries you more as a director in general, big scale scenes or intimate ones?

GB: It is always the intimate ones that require the most attention to detail.

Q: Did you miss the Kraken?

Q: Was the making of POTC 3 as hectic as was portrayed in the DVD of POTC 2?

GB: At World's End' had to be in theatres 10 months after the release of Dead Man's Chest. Hectic? How about insane? Fortunately the cast and crew found their stride enabling us to work intuitively throughout the madness.

Q: You've been featured on Premier magazine's most powerful list. Do you feel powerful these days?

GB: Only when I wear my eyepatch.

Q: Are you planning on doing a 4th part?

GB: I think the trilogy is now complete. All of the stories set in motion by the first film have been resolved. If there ever were another Pirates Of The Caribbean film, I would start fresh and focus on the further adventures of Captain Jack Sparrow.

The Blu-ray and two-disc special edition DVD release of Pirates Of The Caribbean: At World's End is released by Walt Disney Studios Home Entertainment. Extras include Anatomy Of A Scene, deleted scenes, featurettes and host of other stuff. Amazon are also featuring limited edition character cards with their release, for more information, click here.

Extraordinary fabulous moments Bruno Dumont on costumes, the cinematic expression of the narrative, and the internal self of France