Eric Red talks about his latest, ghostly horror film and reveals how he plans to breathe life into the vampire genre. 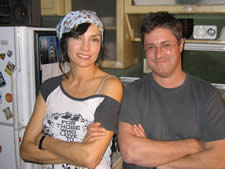 Famke Janssen and Eric Red on the set of 100 Feet

Writer/director Eric Red is responsible for horror genre classics The Hitcher and Near Dark. In the second of our horror features to celebrate Halloween, we talk to Red via email about his latest project 100 Feet and his new vampire movie, which he says will take the blood-sucking genre in a new direction.

Darren Amner: 100 Feet is the latest movie you've written and directed. Currently it’s in post-production; how did the shoot go, and what can we expect from the finished feature?

Eric Red: It’s a classical-style contemporary ghost story that focuses on suspense and terror, not gore. It is old school in that it is character and story-driven and you care a lot about the people in it. The pace is deliberate but it has scenes that will make you jump out of your seat.

The filming went very well. The performances, particularly Famke Janssen and Bobby Cannavale in the leads, are terrific. Technically, the photography, sets, effects, editing are all solid. The film is a mix of old school and new school horror, and hopefully will be a refreshing change for audiences.

DA: Can you reveal anything about the story?

ER: A young woman, Marnie Watson, is granted early release from her prison sentence for manslaughter (killing her husband – a violent NYC cop – in self-defense) on condition she wear an electronic ankle bracelet and remain within her home, effectively under house arrest, for the remainder of her sentence. Her late husband’s partner keeps tabs on her from a patrol car parked across the street, hoping she’ll violate probation and he can send her back to prison. But the 100-foot radius her ankle bracelet allows isn’t the worst of her problems. Her dead husband – now a malevolent ghost – is still in the house, where he died, intent on savage revenge.

DA: Obviously, with a story like this, the set is very important. How did you choose your locations?

Almost the whole movie is inside the house. The interiors of the house had to be shot on sets because to film in the limited confines of the actual brownstone would have been too visually restricting in terms of space for the coverage. Building it on a stage allowed us to fly the walls, floors and ceilings of the set to allow maximum latitude with lenses and cameras. For instance, there are lots of elaborate tracking shots and shots that move through the walls and floors, etc. Would have been hard to do that in a real house.

The New York location scenes outside the house sell the sense of place. I always prefer to shoot on location because you get a reality and verisimilitude, a colour and atmosphere filming on the streets. That realism was very important in 100 Feet because the film had to be convincing. For me, the name of the game in horror is making the audience suspend their disbelief because the emotional involvement is so much greater for them when they believe what is happening on screen. And New York City cannot be faked shooting anywhere else, like Canada. You have to film in New York.

The script is set in a Brooklyn brownstone for creative reasons. New York has a gritty, urban feel but the old brownstones have an atavistic 19th century atmosphere, which was visually appropriate for a contemporary ghost story. There are scenes lit by candlelight, as well as police cherrytop flares. I went to high school near the area where the story takes place, so I knew the neighbourhoods.

The sets work so well, however, that people who have seen the film assume we just shot it in the Brooklyn brownstone.

DA: You have a great cast for this film. Can you tell me about why you chose the actors you did and what you think they bring to their roles?

ER: Famke Janssen plays the heroine, Marnie. The part was a challenge to cast because the actress is literally in every scene and almost every shot. She is a flawed character in the Hitchcockian sense, not your standard audience sympathy character. Marnie is a housewife who killed her abusive husband in self-defense, and a felon. She must face the ghost of her husband and the unresolved issues of her relationship with him and battle internal and external ghosts before she can be free. The character is an everywoman in many ways. Famke is a terrific, prepared and serious actress and had the energy, focus and stamina to play the role. She nailed it in one and two takes almost every time. She was great casting because she had the beauty, force, vulnerability and depth to make her a compelling three-dimensional character. She also brings glamour to the role that reminded me of Audrey Hepburn in Wait Until Dark.

Bobby Cannavale plays Shanks, her dead husband’s vengeful ex-partner, who hates Marnie for killing him and stakes out her house in his car, waiting for her to slip up and break house arrest. Shanks is a troubled, abrasive, aggressive cop. Through the story, we realise the relationship with Marnie and Shanks is more complex than it first appears. Ultimately, Shanks comes to realise strange things are going on and he goes from a bad guy to a good guy.

Marnie has few people she interacts with under house arrest but one is an 18-year-old market clerk named Joey, who delivers her groceries. Ed Westwick plays Joey - he's a young Englishman who plays a believable Brooklyn kid, accent and all. He is a good kid with a somewhat criminal background. He gives Marnie friendship, doesn’t judge her and a trust and attraction forms. Of course, the ghost of her dead husband isn’t happy about it. Ed was offbeat, against-the-grain casting. He is a realistic looking and sounding kid, not one of these interchangeable generic television pretty kids you see all the time.

Finally, Michael Pare plays the ghost. I used him in Bad Moon as well. The ghost has no dialogue and Pare was able to protect powerful, Kabuki-like states of emotion necessary for the apparition. The ghost is mostly achieved with an actor in special effects makeup, not CGI.

DA: What inspired you to tell this story?

ER: I wanted to do a ghost story for a long time. I love the literary tradition of novels like Shirley Jackson’s The Haunting Of Hill House. I’m a big fan of the J horror films like Ringu and Juon and the convincing, gritty handling of those pictures. When a few high-profile house arrest cases made the news a few years back, I had my hook. If you stay in the house you have to face the ghost; if you leave the house you go back to jail. And with the ghost being their murdered spouse, there were all sorts of dramatic possibilities in terms of personal conflict. I love stories that involve a strong mano a mano.

DA: What were your visual influences whilst shooting this movie? I read that it is to have a contemporary look whilst maintaining a classic ghost story feel. What camera work and filming techniques did you use to achieve this?

ER: The film’s visual style relies on elegant, long takes, deliberate editing and few quick cuts except the horror scenes. I wanted to get as far as I could from the hyperkinetic MTV and TV commercial style that’s become such a cliché in horror films. It’s attention deficient disorder filmmaking. Also, I wanted 100 Feet to be a beautiful looking film. Lots of darkness, plenty of shadows, but lots of depth of field and detail in the darkness. Some scenes were shot entirely by candlelight. It is filmed in Super 35 and widescreen, and the images have a lush, vibrant and lustrous look. I hate bleach bypass, ENR and all those desaturation techniques that are so overused in films nowadays. Totally unreal. I wanted to colors in the film to be true. I used a lot of wide lenses in the film. Mostly, it was the right style to use for this story; other stories would require different shooting techniques.

100 Feet is a classical style film. Movies like The Innocents, Rosemary's Baby and Wait Until Dark were inspirations, particularly the brilliant framing of the latter.

DA: Do you think 100 Feet will bring something fresh to the genre?

ER: I hope audiences will find this film a fun change of pace. 100 Feet is as different from Saw and Hostel as can be, although I really dig those pictures. In this one, though, there’s very little gore with the emphasis on suspense and tension and suggestion. There’s a very slow build. We spend a lot of time with this woman alone in the house in her day to day, with the growing sense of unease that something is in the house with her. This makes it scarier when the ghost haunting becomes very physical. The goal was to keep the viewers as uneasy as the protagonist, creating a feeling of something always about to happen; and when it does happen it happens when you are not expecting it.

There’s a scene in the picture - where there is almost no blood - that made the people I have screened the film to cover their eyes, then jump out of their seats. For me, that’s a great deal of fun as a director, because it’s about horror technique to scare, not splatter. That’s the elevated approach.

DA: I recently saw Planet Terror which featured the welcome return of the one and only Jeff Fahey - whom you of course worked with on Body Parts - another great film. What do you think about him coming back into the limelight and would you consider casting him again in a future role?

ER: Sure, Jeff’s a good actor. He has a warmth and likeability as a person that rarely seems to get brought out in films, but I think we brought that out a lot in Body Parts.

DA: Is Body Parts ever going to get a good DVD release, as some of your other films have done?

ER: There are no plans for a DVD special feature release for Body Parts at the moment. There are two great scenes that were cut from the film because of ratings issues. One, with Fahey finding his severed arm after the crash and watching it getting run over by a truck, was the horror high point of the film. I am working to get Cohen And Tate released on DVD.

DA: I hear that your next film will be Nightlife, which you will both write and direct. The synopsis states it features vampires. Can you tell Eye For Film about this project and how you intend to put your stamp on the vampire genre?

DA: Thanks to Eric Red for taking time out from editing 100 Feet to conduct this interview. The movie looks to be welcome change for the horror genre - watch this space for more about it closer to its release in 2008.