Eye For Film >> Features >> The Restoration of Oz

The Restoration of Oz

As The Wizard of Oz returns to delight a new generation, we explore the real magic of cinema. The film you'll see in cinemas now is clean and bright; but how was this achieved? 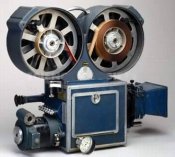 The three-strip Technicolor camera - the source.

The Wizard of Oz was photographed in 1939, using a pioneering three-strip Technicolor technique. This captures three separate black and white negatives - one for each of the cyan, yellow and magenta (CYM) colours. This is achieved in camera through a series of prisms and colour gels filtering light through the camera lens and capturing the appropriate light levels on each strip, each of which is uniquely sensitive to the appropriate colour.

Early Technicolor movies used two strips of film, capturing only a subset of the colour spectrum. Modern audiences can see a recreation of two-strip Technicolor film during the first forty or so minutes of Martin Scorsese's The Aviator, which blends cinematographic technique with digital colour-correction in an invigorating and wholly new, yet timeless aesthetic. [1] 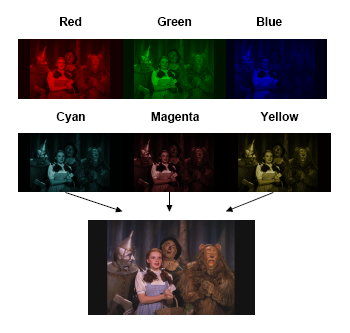 When originally printed to film, these black and white passes were combined using a patented imbibition process to create a beautiful Technicolor dye transfer 35mm print - which, unlike most modern Eastman prints, did not fade. The vivid "Technicolor" look came from these unique dyes. For modern re-releases, one must turn to digital tools to recreate this splendid colour transfer. The last film - at time of writing - to use this near-extinct dye-transfer process was a select set of prints for Francis Ford Coppola's Apocalypse Now: Redux back in 2001, created from Colour Reversal Internegative elements.

The first requirement to a successful film restoration of any kind is an evaluation of all the best quality usable material. It has been said that "Oz is perhaps the most protected film in history," based on the sheer volume of release and re-release prints, television masters and several photochemical restorations. So, for the restoration technicians, obtaining as many release prints as possible became the priority. The goal was to find unfaded image which could be a reference point for subsequent video colour-correction.

Each of the camera negatives were scanned at 4K resolution using a wet-gate film transfer. A wet-gate process washes the element with non-abrasive liquid before it is passed before the digital film scanner, thereby eliminating minor dust and dirt, and avoids film emulsion wear from contact cleaning. Each of the three colour registrant frames are in black and white, captured at twelve bits per pixel (allowing for 1024 shades of grey), and must be combined digitally to produce the full colour frame - which will then be adjusted to the desired colour levels by skilled colourists.

The difficulty of this form of digital restoration is the factor of differential shrinkage - which is what Warner Brothers' digital Ultra-Resolution process combats. As a film is stored in a vault, the chemicals and moisture used in the organic-compound film stock will very slowly cause the film to shrink. Each of the Cyan, Yellow and Magenta registrants shrinks at a different rate, thereby requiring appropriate scaling and warping to re-align each frame. Since the film has been scanned at such a high resolution, one can create software which adjusts this alignment very precisely using edge detection algorithms. This careful digital alignment yields an image which is even better than was possible at the film's premiere. Registration errors, aka ghosting, which plagues re-releases of Technicolor films has been cleverly banished.

Now that the film is in the video realm, each frame must be "dust-busted". This is done using automated software used to remove tears, imperfections and scratches from each of the black and white CYM elements. An early test was to examine the three separate frames.

If there is an area of white or black which does not exist on the other two colour registrants, it is treated as "dirt". Colour and brightness information is extracted from neighbouring pixels and the other colour elements to fill in the the area. Sadly, in this case, this worked far too well. No only did it remove the colour specks that plague various Technicolor restorations, it also ended up erasing much detail and primary colour information - including the signature sparkling ruby slippers and highlights in Judy Garland's costume. The bright primary colours which only showed up exclusively on a single black and white separation master were erased as dirt.

Artists were brought in to assist the computer's cleaning of the new archival master. The Tin Man would doubtlessly approve - providing a heart for the machine.

This is the first 4k Ultra-Resolution transfer and archival video master. Warner Brothers have previously achieved full 2k restorations of Gone With The Wind, The Adventures Of Robin Hood and Singin' In The Rain - and the results are spectacular. The 4k digital master can be recorded back to film with no quality loss, and it can be used as a high-definition video master for broadcast, digital projection for cinema and retail Blu-Ray/HD DVD and DVD.

Where to next? I hope that other set of ruby slippers - Michael Powell's The Red Shoes - is among the next to receive this glorious Technicolor treatment.