Snow White is an It girl lately, with a two adaptations of the Brothers Grimm story - Mirror Mirror and Snow White And The Huntsman - already plying their poisoned apples at the box office this year. Now Torremolinos 73 director Pablo Berger has taken the story of a girl, her evil stepmother and a string of diminutive unlikely heroes and given it a stylish black and white twist. The result is a mischievous take on the tale that features the most delightful performance by a cockerel you're likely to see for a while.

The key elements of Snow White are all present and correct - along with several nods to Sleeping Beauty - and Berger's decision to transport the action to 1920s Spain injects them with a fresh energy and some unexpected plot pirouettes. Here, little Carmen (Sofia Oria) is no stranger to tragedy, with her mother dead on the day of her birth and her toreador father Antonio (Daniel Giménez Cacho) brutally injured in the bullring. Things take a turn for the worse and she finds herself - and her plucky cockerel Pepe - thrown into the hands of her evil stepmother Encarna (Maribel Verdu), her father's former nurse, who is, as her name might suggest, the embodiment of evil. By the time Carmen (now played by Macarena Garcia) has become a young woman, her stepmother has had enough of both her and her father - but when Carmen is left for dead, things start to look up.

Actually, looking down would be more appropriate, as the young lass is rescued by a travelling troupe of dwarf bullfighters who discover that the matador spirit flows strongly through her. The only problem being that she now has two enemies instead of one...

Although much of the action is played for dark comedy, Berger undercuts his pastiche with unexpected poignancy at key moments. Kiko de la Rica's cinematography is achingly good and scenes in the bullring bring both romanticism and comedy. The actors match the black and white of the setting, with Verdu beautifully wicked and Garcia suitably dewey eyed but with plenty of steel.

While an S&M aspect to the stepmother brings unwelcome shades of grey to what is otherwise a film that could easily be enjoyed by the whole family, much of her shenanigans will probably float over youngsters' heads and older children will certainly love Alfonso Vilallonga's scoring - with its clarinet 'theme' for Pepe bringing the spirit of Prokofiev's Peter And The Wolf to proceedings. The black and white setting, of course, calls to mind The Artist, but this is a much more gothic affair that deserves to be appreciated in its own right. 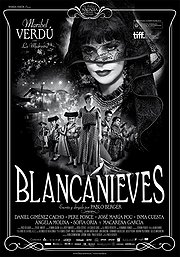 The Artist
The Natural History of the Chicken
Whatever Happened To Baby Jane?