The Natural History of the Chicken

The most consideration the man on the street usually gives a chicken is whether to have leg or breast from the Sunday roast, but Mark Lewis's wry documentary is set to change all that.

In a collection of stories, ranging from the serious to the bizarre, Lewis charts the relationships we enjoy with our feathered farmyard friends. During the course of this 57 minute documentary we meet a woman who resuscitated her prematurely-frozen hen, another who treats her bantam like a member of the family and Mike, a chicken so robust that it lived for years after having its head chopped off.

Shot like an episode of Cluckwatch UK, we are treated to a series of re-enactments of these plucky tales of derring do, intercut with sterile images of battery farming and US chicken facts. You may be interested to hear, for example, that the average American eats 80 pounds of chicken per year. Or not.

Lewis handles the documentary with a lightness of touch, allowing the intercutting of various hen homages to speak for themselves. It is left for the audience to decide whether living as a free-range chuck and being killed by the farmer for his family is, ultimately, a better life than living in a cage with six companions and watching your eggs speed away on a conveyor belt.

The film shies away from graphic depictions of chicken culling, preferring to concentrate on the quirkier side of a birds' eye view of the world. Absolutely great fun! 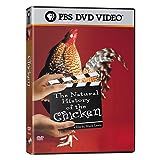