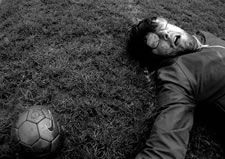 Two low-budget film-makers are getting a helping hand from Picturehouse Cinemas to promote their short I Dream Of Zinedine Zidane. The film, written by Jack McGinity and directed by Tim Gee, will be shown before Ken Loach's new film Looking for Eric.

Made for (probably) a fraction of the main feature's budget (Â£50), I Dream of Zinedine Zidane is a digital photomontage shot in black and white with a nod to French art house film. It's narrated by a frustrated armchair-footballer who is nimble on the keypad but hopeless on the pitch.

Writer McGinity says of the character "I was inspired by the fact that I was amazing at computer football games, but utterly rubbish in real life."

When London-based McGinity and Gee heard about Loach's film they sent their own short to his production company, who liked it so much they gave the pair the go-ahead to contact the film's distributor about screening the films together. 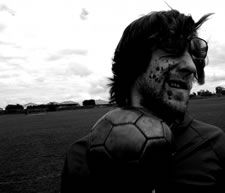 I Dream Of Zinedine Zidane can be seen at the following cinemas:

You can also watch it online here