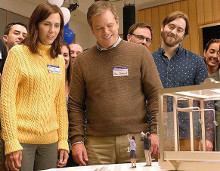 The Venice film festival notched up its 74th festival in 2017. Running from August 30 to September 8, it opened with Alexander Payne's Downsizing. The Golden Lion was won by Guillermo Del Toro's The Shape Of Water.

British filmmaker Stephen Frears (Prick Up Your Ears) will receive the Jaeger-LeCoultre Glory to the Filmmaker award. Jane Fonda and Robert Redford will receive Golden Lion awards, while their film Our Souls At Night will premiere out of competition.

Racer And The Jailbird
In the Belgian underworld, a secret threatens a couple's romance.

First Reformed
Thriller centring on an ex-military chaplain who has lost his son and a member of his church who is grieving for her husband.

Western
A group of German construction workers on a job in Bulgaria begin to compete for the approval of the locals.

The Third Murder
Leading attorney Shigemori takes on the defence of murder-robbery suspect Misumi - a crime he admits - but as he digs into the case, he begins to wonder if his client is guilty after all.

No Date, No Signature
A pathologist is riven with guilt after the death of a child.

Nico, 1988
Biopic of the German singer, who sang with the Velvet Underground

Foxtrot
A family's world is rocked when they are told about the death of their son.
A-Z of Venice Film Festival 2017 reviews >>>

Inner chaos
Trine Dyrholm on the costumes for Nico, 1988, Ruth Berlau and Bertolt Brecht, and Astrid Lindgren
States of mind
Trine Dyrholm on getting know Nico and Susanna Nicchiarelli's vision for Nico, 1988
Out of the past
Susanna Nicchiarelli on Trine Dyrholm and the costume design in Nico, 1988
Reconstructed heroine
Susanna Nicchiarelli on exploring character in Nico, 1988
Actors’s pride for 120 Beats Per Minute
Award-winner Biscayart on sexuality, activism and the pink condom
Green-eyed monsters
Paolo Virzì on jealousy, Hemingway's cats and adapting The Leisure Seeker
Chaos theory
Samuel Maoz on Silver Lion winner Foxtrot
Campillo’s beat goes on
Director on AIDS drama 120 BPM, writing from the heart and collaboration
On the road
Paolo Virzì on Donald Sutherland, Helen Mirren and The Leisure Seeker
Taking the waters
Samuel Maoz and Lior Ashkenazi on Foxtrot
What makes a Martyr?
Mazen Khaled on male identity, death and freedom in his Biennale College film.
Venice 2017: Three Billboards, Victoria And Abdul, Lean On Pete and The Third Murder
Actors stake claim at start of awards season.
Venice 2017: Downsizing, Suburbicon and The Shape Of Water
Whimsical opener shrinks in face of Clooney satire and Del Toro creature feature.
Keeping score
Director Giorgio Ferrero on music and memory in his documentary hybrid Beautiful Things.
Mining the mystery
Alena Lodkina on neo-realism, longing and outsider perspective in Strange Colours.
News of a death
Lior Ashkenazi on Foxtrot and going to the edge of his emotions
Heart of the matter
Katell Quillévéré on Heal The Living, organ donation and E.T.