Who's That Knocking At My Door

This black-and-white feature debut from Martin Scorsese offers an early serving of the Italian-American slice of life that was to become a fundamental part of many of his best films, most notably Mean Streets and Goodfellas. It also introduces us to the work of some who would go on to be a staple of his crew, including the then angelic-faced Harvey Keitel and Thelma Schoonmaker (working on only her second feature).

The action is less a strong narrative than a series of vignettes in the life of proto-wise guy JR (Keitel), who is still living in his mother's home and currently in between jobs, filling most of his time with his friends Joey (Lennard Curas) and Sally Gaga (Michael Scala). He encounters a girl (Zina Bethune), noticeably never named, reading a French magazine in what is less a meet-cute than a meet-uncomfortable. They strike up a conversation about John Wayne, here representing the sort of archetypal masculinity that JR aspires to on some level. This conversation gives the film a strong sense of time, as well as place, anchoring it firmly in the reality of New York in the late 60s.

Scorsese's film is comprised of deliberate contrasts, from the opening scene where a strident soundtrack accompanies domestic scenes of his mother baking, to the way that the young men positively luxuriate in the threat of violence, thrilling to the danger of it. JR, meanwhile, views women as either "girls" - his shorthand for "virgins" - or "broads", meaning whores. For him, there is no grey area, which is soon to become a problem in terms of his burgeoning relationship.

The sense of worlds colliding is suggested not just by JR's attitude but by the approach of the girl, who at one point lights his mother's "holy candle" for atmosphere without realising the symbolism for him. This is no doubt JR - and Keitel's - movie but the girl, despite her lack of name, is a person in her own right and Bethune imbues her with a steely determination that goes beyond the script.

Scorsese takes a loose approach to the story, happy to dally for five minutes to show JR bedding a succession of girls, in a scene that feels as much like a short film in its own right than a part of the bigger whole here. Essentially, the young director is giving lots of thing a go, trying out ideas he must have seen in French New Wave films alongside elements that feel more associated with US experimental work, such as that by Shirley Clarke. Everything from mixing still photography and action to experimenting with shots from above, long takes and fades. Inevitably, not all of this works, but there is rarely a dull moment. Best are the rough and tumble interactions between JR and his mates, their bond strengthened by bickering. Less successful are scenes in which he presses our noses firmly to the religious iconography that has been a fundamental of JR's life, which come off as melodramatically juvenile and lacking the nuance he would go on to develop in his later films. 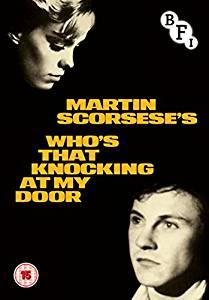 Snapshot of the life of a young man in 60s New York.

Keitel - a man for all seasons
Scorsese on Scorsese