What Now? Remind Me

You know those speeches some people give about how all pharmaceuticals should be avoided because they have side effects that harm the body? They're very strange to listen to as a chronically ill person, with a body that recognises harm as a default state. Joaquim Pinto has lived with HIV for over two decades and has used everything available to survive that long. This documentary was made over the course of year whilst he experimented with a new drug that was less rough on his body than some but had strange effects on his mind. The result is a meandering, poetic vision which is admittedly lengthy yet crams in far more information and ideas than it would be reasonable to expect. It's epic in scale but simultaneously very personal, a chance to connect with one man's story and, through it, those of millions.

Pinto has worked in the film industry throughout his adult life. His specialty is sound, and his talent is certainly in evidence here, especially in scenes exploring the natural world, but he also wrote, lit and directed this production, and it's a technically excellent piece of work. Helping out in places is husband Nuno, sweetly stand-offish and camera shy but always full of warmth, hinting at the source of the emotional strength that has kept Pinto going. Less shy are the couple's four dogs, who go with them everywhere and whose play provides plenty to entertain the eye during Pinto's more esoteric ramblings.

There's a serendipitous character to the film, suggestive of a strong intuitive act of creation even when the drugs make straightforward reasoning a stranger. Branching off at tangents from Pinto's own story, it explores the history of the disease and of disease as a concept, the fear of epidemics, the legacy of interconnecting strands that made the experience of AIDS what it was in the Eighties and what it is today. Poignant tribute is paid to some of those who didn't make it but Pinto's holistic approach suggests that nothing about their struggles was in vain. Even the insects that buzz through the fields seem to have a purpose here, their small actions triggering long chains of consequence. Pinto fins the expression of thee patterns in art and, of course, in cinema itself, reflecting on his career. He brings a sense of immediacy to events now far away in time. Everything is always happening now, continually impacting on individual lives.

Is it all about the drugs, or is there something about having lived for a long time with no clear expectations of the future that leads to this time dilating affect? It's hard to say, but this is far from just another tediously heroic tale of life with tragic illness. The lives captured here bleed into one another; the whole is wild and rambling but starkly relevant, and every viewer will likely find some personal connection. Yes, there are places where it's a little too slow, where it verges on incoherence, yet i never feels indulgent. At its core, it is the story of a man who recognises how precious a thing life is, and opens up its wonder. 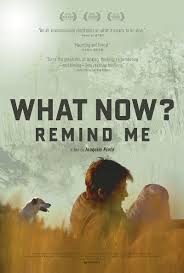 The director muses on 20 years of life with HIV.