Boston, 1976, at the District 11 (Dorchester) police station. We hear of an assistant district attorney, an arrangement, little boys in a room are making crayon drawings, two priests leave the station house and enter into the back of a car that drives away quickly on the icy streets. The opening scene of Spotlight sets the tone for Tom McCarthy's astutely paced newsroom thriller, edited rigorously by longtime collaborator Tom McArdle (The Station Agent, The Visitor and Win Win).

Fast forward to 2001 and The Boston Globe is expecting a new editor-in-chief to arrive from the outside. Speculation about more staff cuts spreads throughout the newsroom. Following a long walk through corridors of the no-nonsense offices with reporter Sacha Pfeiffer (Rachel McAdams who has never been better), carrying a slice of goodbye cake for a retiring colleague, we reach the movie's belly of the whale, the daily newspaper's Spotlight team.

Mike Rezendes (Mark Ruffalo, all shoulders and fringe, resembling a hyper Franciscan monk) and Matt Carroll (Brian d'Arcy James, wonderfully mild-mannered) sit behind their desks, next to Sacha, in front of Walter 'Robby' Robinson (Michael Keaton, more brittle and daring than a mere Birdman), whose office has an open door.

The former Miami Herald executive editor Marty Baron (a very convincing Liev Schreiber) arrives without much introduction or fanfare to take over. After an informal chat with deputy managing editor Ben Bradlee Jr (John Slattery, understatedly impeccable), he shrewdly plays it low-key by next setting up a meeting with Spotlight leader Robby at a restaurant to discuss his role with the paper. Robby informs Baron that his team usually takes two years to research before they are ready to publish a story and notices that his new editor may find that length of time expendable.

In a newsroom filled with reporters who were raised Catholic and are now in varying stages of commitment to their faith, Baron, who is Jewish and not part of the fabric of Boston society, wants to reinvestigate the allegations of child abuse against the Catholic Church. Being an outsider, he lacks the sense of intimidation that comes with years of grooming by what is considered acceptable power dynamics.

He chooses the Spotlight team to move forward on tackling the intricate cover-up system in place to hide the child abuse committed by Catholic priests over many years and the eventual settlement payouts by the Church. The toll the investigation takes on their private lives begins to mount up. To expose a powerful, entrenched system becomes an all consuming task on the journalists. When Marty Baron has his mandatory meeting with Cardinal Law (Len Cariou), he learns a few things about what is expected of him and is given a package, gift wrapped in gold paper with a wine-red ribbon, containing the Catechism (paperback, 4th edition).

Robby and Sacha calmly team up to take on prominent lawyer Eric MacLeish (Billy Crudup), an immaculately dressed Mephistopheles, all pride and carefully hidden despair. The sparkle in his eye holds the gaze with a shiny hook - he has been known to represent the victims of child abuse. Crudup brilliantly gives us a cypher of a man whose motivations we are dying to read. Mike, a man in constant motion, grapples with Mitchell Garabedian (Stanley Tucci), a lawyer who is not-well connected, but committed to seeing his clients get justice through the court system.

Sacha and Matt go door-to-door searching for victims who will come forward, while Mike literally runs and runs in order to keep up with the rapidly changing findings he uncovers. "If it takes a village to raise a child, it takes a village to abuse one," says Robby, as his team's progress grows, garnering cooperation from the victims that include members of SNAP (Survivors Network of those Abused by Priests), led by activist Phil Saviano (Neal Huff).

Spotlight does not fall into the trap of explanatory flashbacks. We do not need to see the protagonists' past because we can tell so much from what they are wearing. Costume designer Wendy Chuck, unrivaled master of khaki pants nuance, shows everything we need to know. From George Clooney in The Descendants to all her other fantastic collaborations with Alexander Payne (Election, About Schmidt, Sideways and Nebraska), Chuck dresses people in a way that explains something to us about the fleeting nature of clothes as well as the stamp they put on us. Her choices transcend the movies while being an integral part, something only the best achieve.

Keaton's khakis, more golden in hue than those of an old school alum, influential lawyer Jim Sullivan (Jamey Sheridan) and his watch just a little bigger and shinier, go with the rubber soles on his shoes and mark him as comparatively nouveau riche. Rachel McAdams gets to wear the clothes of a woman deeply uncomfortable with her body. The black tops Sacha prefers, are there for her to hide in and blend in. She is on a mission and McAdams portrays her fearlessly and without a false note.

The question: "What took you so long?" is at the core of Spotlight. The time of looking away from something that needs to be addressed adds up. Every non-action towards a crime comes with a price and the truth will be dragged into the open eventually. In 2003, The Boston Globe won the Pulitzer Prize for Public Service for their investigation and this film is based on those who uncovered the hidden story.

The Independent Spirit Awards has announced, that Spotlight is the winner of the Robert Altman Award. 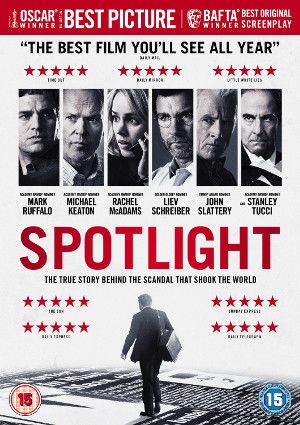 The true story of how The Boston Globe uncovered the massive scandal of child abuse and cover-up within the local Catholic Archdiocese.

Shedding light
Dressing for the Spotlight
On the spot
Unholy truth
A light in dark places
Venice 2015: Peak viewing

The Boston Strangler
Mea Maxima Culpa: Silence In The House of God