The Descendants costume designer Wendy Chuck talks about high-waisted trousers, choosing shirts and the demands of her craft. 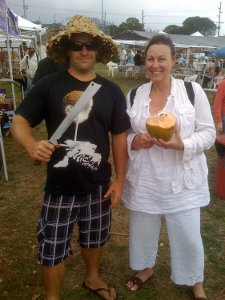 Wendy Chuck, Alexander Payne's imaginative costume designer for The Descendants sees herself not as a "fashion person" but as someone who makes things work, who is good at solving problems. She likes detective work.

Payne's latest film centres on a phenomenally badly dressed George Clooney as Matt King, a Hawaiian lawyer, who discovers the truth about his own life and what is important. Wendy Chuck flew to Honolulu early on to do research. And then, one rainy lunchtime in midtown Honolulu, she found him: "There he was, George's character" - all high-waisted pants with Hawaiian shirt tucked in.

Finding the perfect role model is often only the beginning. "I always ask: Is he going to go for this? Many actors are not." For reasons of vanity, she often has to water down the original concept of a character. Not so with Clooney, who was "totally on the same page" and seems to thoroughly enjoy how the change in dress transforms his overall body language.

"Alexander gives me the script early. And I throw him some ideas", Wendy said about the preparation with Payne, which she described as very different to other directors. "He has nurtured my creative process", something not very common in the fast world of Hollywood productions. "Getting the essence of people," is what the work of costume design can be about.

When film costumes work, as they do so brilliantly in The Descendants, Roland Barthes' observations on Language and Fashion find a place on the screen: "Language and dress are, at any moment in history, complete structures, constituted organically by a functional network of norms and forms; and the transformation or displacement of any one element can modify the whole, producing a new structure: so, inevitably, we are talking about a collection of balances in movement, of institutions in flux." (History and Sociology of Clothing)

Clooney's Matt King's lack of awareness is openly displayed in the way he wears his clothes. With the high waist of his khakis, fashion has come full circle. They are so far out of style, maybe modeled on the character's father or even grandfather, that they become interesting again. Coincidentally, Hawaiian prints were everywhere at the Spring Summer 2012 collections, from Jean Paul Gaultier's men's collection, to Stella McCartney's psychedelic Hawaiian resort prints.

When King's wife falls in a coma, he seems to awake out of one. Deciphering the dress, in this case, the pants and shirts, help us understand far more meaningful choices as well.

"He plays a man who didn't buy clothes," said Wendy, explaining her approach to the character. There is an art to picking the right Hawaiian shirt for the occasion. Being on location and invited along by Alexander Payne to the scout, helps a great deal to give a character authenticity. "I could open up people's closets," she said, and started to understand the fine points of which shirts would be worn for business and private occasions. From "beautiful shirts by Tori Richard, a company that exists since the Fifties" to "particularly ugly ones" from thrift stores, Wendy not only tries to get what actual people are wearing, she said: "I choose the tone of the shirt, mirroring the tone of the scene, like a reverse navy blue/white print when he is in turmoil and a jungly green when he is on the other island."

"The atmosphere on the set is very laid back and Alexander is big on actors bringing clothes." He sometimes asks her to look at what they brought for auditions.

Beau Bridges, who has a house on Hawaii, was very helpful, directing her to a T-shirt store and other places only the locals know. The fact, that Bridges had decorated the shirt he wears in a scene himself 20 years ago, Wendy only found out from reading my coverage of the New York Film Festival press conference.

I asked Wendy about the one character whose clothes are very different from everybody else's in the film. Matthew Lillard, who plays Brian Speer, real estate broker and George Clooney's wife's lover in The Descendants is "dressed as an outsider - corporate." He turns out to be the catalyst for Clooney's Matt King. Speer (I can't help wanting to call him Albert) doesn't change, and it is precisely this unmoving corruption that brings about the transformation in Clooney's King.

What is Clooney's character's relation to his surroundings? What is his degree of participation in the world around him? As realistic as the film is, the symbolism of the flowers should not be overlooked. Nature is blooming on the shirts of men. His clothing choices make him part of a group and integrate him into the society he lives in, governed by money. It takes a terrible personal insult for him to take action and PROTECT, not only his daughters, but precious unspoiled land, owned by his family that he has the power to preserve or destroy. He can transcend beyond the pressures of his cousin descendants and enter into a new system, in which he, not by coincidence, is comfortable watching a Nature program with his daughters, about penguins, those always dashingly outfitted birds.

Wendy Chuck's first collaboration with Payne was on Election (1999) and happened only three months after she arrived in Los Angeles from Australia. At her audition, she was one of 10 in the running, and, she told me, although the studio wanted someone else, it was Payne who really liked her and her perspective as an outsider.

When I asked her about favorite directors, the first name she mentioned was Fellini. Tim Burton is someone whose work she likes and that of his costume designer Colleen Atwood.

Not all film work as a costume designer is as rewarding as a Payne experience. "In the trenches," as Wendy put it, "our jobs are getting harder. Everything is faster and more demanding, but I can't make people sew faster. Our vendors are not attuned to that. It demands a lot of patience. The quality of my work is asked to be compromised."

Some costume designers do not even know who their boss is. The tasks can be vague and uninspiring. What is a sexy character? Cookie-cutter expectations are everywhere. How do you dress a woman who is written without any depth?

When I spoke to Wendy by phone, Yves Saint-Laurent's friend, muse and collaborator Loulou de la Falaise had just died and I told Wendy how I ran into her from time to time on the street in Paris and was always dazzled by her unique style and grace. It made me happy and told me something about myself. The work of costume designer can do just that. Wendy Chuck is aware of the power of movie and TV costumes, especially for women and the often unimaginative gender stereotypes "offend my sense of morality", she told me. "Making a product to squeeze between commercials", is not her thing.

She knows about "people as brands" - she, after all, was the costume designer for Twilight (2008).

The Descendants is currently out in US cinemas, it will open in the UK on January 27.

Every Day In Kaimuki The Island The Dream And The Radio Parallel Mothers Boris Karloff: The Man Behind The Monster West Side Story The Panola Project Call Jane Am I OK? Three Minutes: A Lengthening Nanny Nothing Compares Last Night In Soho All That Breathes The Power Of The Dog Rifkin's Festival Living Riotsville, USA Procession The Harder They Fall

The magnificence of the heroine Maria Tatar on fairy tales and The Heroine With 1,001 Faces

We're currently bringing you coverage of the Sundance Film Festival.