For some, war is all about the bigger picture - for László Nemes, it's all about using the small to reflect the large. He closes his camera in on one individual in the Auschwitz-Birkenau death camp, Saul (Géza Röhrig), a member of the Sonderkommando - which translates as the euphemism 'special units' and is now a word rarely used in Germany because of the lasting connotations. Saul is one of the unlucky prisoners forced to clear up the clothes of those sent to the gas chambers before shifting the dead - referred to chillingly as "the pieces" - to the crematorium and then shovelling away the resultant ashes.

This is a claustrophobic, breathing-down-your-neck look at man's inhumanity to man - as though the Dardennes brothers had taken a one-way ticket to hell. Nemes and cinematographer Mátyás Erdély (who puts similar techniques to terrific use in Josh Mond's James White) use long takes to makes us feel the constant, twitchy panic as Saul tries to keep pace with the Nazi death machine in the final days of the war, when even the furnaces failed to keep up with slaughter on such an epic scale. Horror is kept at the fringes, blurry and vague - though inescapable and no less terrible - giving us a prickly, uneasy sense of the inner psychology those faced with unthinkable mass murder must have had to adopt to survive. The red cross on Saul's back offers a constant reminder of blood.

The driver of the story is a new level of desperation that emerges in Saul after he sees a child he thinks is his son. The obscene marriage between casual cruelty and extreme documentation of the Nazis - also emphasised in the recent 13 Minutes - is epitomised in a single scene where the boy, having somehow survived the gas chamber, is summarily dispatched by a guard who instructs the doctor to conduct a full autopsy to find out why he was so special.

Saul, determined to bury the body, begins brokering his way around the camp in a bid to save the boy from the flames, all the while we follow him, getting a sense of the structures that had built up over time and the everyday horrors endured. His attempts to find a rabbi are made even more complicated by the fact that the entire camp is on the brink of a prisoner uprising (a real event that happened on October 7, 1944).

The smaller the picture, the bigger the weight of gesture, with every touch of a hand on an arm taking on greater importance. By removing the sort of visual voyeurism that many filmmakers have employed to explore the Holocaust - a subject of ongoing debate - Nemes leaves us focusing both on the internal moral turmoil of Saul and on the deluge of noise he endures. Sound designer Tamás Zányi creates a manic mosaic, with the constant bark of orders, intermittent screams of death, gunfire and a jumble of chaos adding to the sense of dislocation and fear. In the middle of it all stands Röhrig - incredibly, making his cinema debut - conveying, mostly through gesture, the determination of a soul who refuses to be cowed. 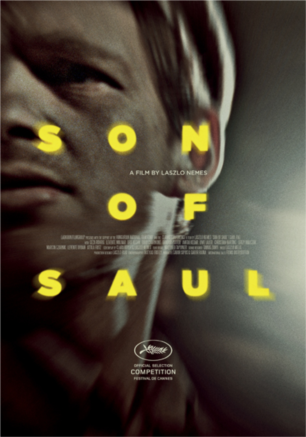 In the horror of 1944 Auschwitz, a prisoner forced to burn the corpses of his own people tries to save a body from the flames.

The Grey Zone
The Last Of The Unjust