Jake Shreier's debut has a retro charm that will please children of the Seventies and Eighties who, like me, always yearned for a Buck Rogers' style Twiki robot or even our own Metal Mickey. However, even if you have never fancied the skin-tight pants off Gil Gerard or sucked on an Atomic Thunderbuster sweetie (and, frankly, you don't know what you're missing) you're still in for a treat of a film that packs both laughs and a lot of heart.

Sometime in the not too distant future, we meet Frank (Frank Langella), an ageing bookworm with a talent for cat burglary. Now more or less going straight - even if this is mostly due to advancing years and lack of opportunity - the short term of his memory is much bigger problem than the long arm of the law. His kids (James Marsden and Liv Tyler) are pretty fond of the old rogue despite his spells in prison, but perhaps not quite fond enough to put their own lives on hold to look after him. Which is why Hunter (Marsden) hits on the idea of buying dad a caretaker robot (Peter Sarsgaard providing drily amusing vocals).

Although Frank is initially enraged by the nannying of his new companion - "that thing is going to murder me in my sleep!" - it isn't long before an odd couple friendship sees him enlisting his sidekick in some less than upstanding activities, all in the name of keeping Frank's brain active, of course.

Jake Schreier and scriptwriter Christopher Ford go well beyond the initial fun of the robot conceit to craft a thoughtful film musing on both the ageing process and our relationship with technology. Instead of just milking the robot joke for all that it's worth, they use the concept as a means to develop a genuinely surprising narrative that includes a heist and several pleasingly untelegraphed plot twists. The issue of dementia is also well-handled, with the robot acting as a sump into which Frank can pour his frustrations about his illness yet also emphasising the loneliness that diseases like this can bring. Langella is outstanding as a man who uses anger to mask his isolation, while the robots - including a chunky library bot named Mr Darcy, who is set to lose his job along with his librarian companion Jennifer (Susan Sarandon) - are cutesily old-fashioned, which only adds to the film's appeal. Funny, touching and with a ring of truth beneath the laughter, Shreier and Ford mark themselves out as talents to watch. 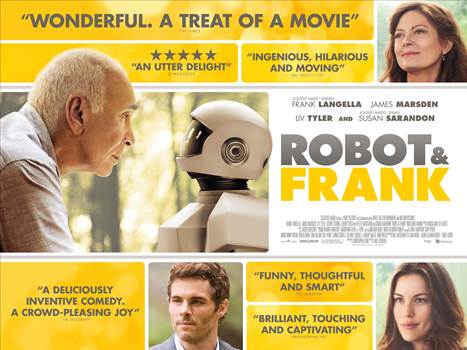 A curmudgeonly OAP's kids install a robot as his caretaker.

Sundance Episode 3: Beasts Of The Southern Wild, Robot And Frank and Lay The Favourite.

Lars And The Real Girl