Eye For Film >> Features >> Sundance Episode 3: Beasts Of The Southern Wild, Robot And Frank and Lay The Favourite.

Sundance Episode 3: Beasts Of The Southern Wild, Robot And Frank and Lay The Favourite.

Unusual care-giving, a film to be beaten and playing the odds. 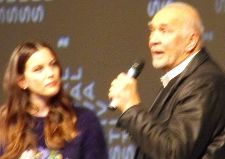 The ever excellent Langella holding forth at this year's festival

Unusual care-givers were the name of the game of Day Three of Sundance - from a mechanical assistant in Robot And Frank, to an offbeat and fiercely touching dad and daughter relationship in Beasts Of The Southern Wild, and an unlikely mentorship between a Vegas bookie and a former lap-dancer in Lay The Favourite.

All have their merits but I was simply blown away by the bravery, beauty and overwhelming freshness of Beasts Of The Southern Wild. It is the remarkably accomplished directorial feature debut by Benh Zeitlin and I'd go so far as to say that it is one of the best US dramatic competition entries I've ever seen out here at Sundance.

Beasts tells the story of Hushpuppy (Quvenzhane Wallis), a six-year- old girl who lives in The Bathtub, a cut-off corner of Bayou, with her extremely unconventional - and unwell - dad Wink (Dwight Henry) and the rest of her off-kilter community. It's a place where children are taught the lay of the land and their place in nature and more or less left to their own devices. It's also a place where a child's imagination can hear the heartbeat of even the smallest creature and conjure up mythical beasts.

Stunningly shot and with catch-your-breath performances that are even more amazing when you discover both Wallis and Henry are non-professionals. Also filed under amazing is the discover that the film has been adapted for Lucy Alibar's Juicy And Delicious, by Alibar and Zeitlin. Normally, films find it hard to escape the confines of the stage - the most recent example that springs to mind is Carnage - but here, you can only wonder how a stage ever held such a multifaceted, living, breathing piece of drama as this. It seems unfair to tip a film this early on for the dramatic competition, but I'll be surprised (though incredibly pleased, of course) if I see anything else as good here this year. I wouldn't be at all surprised to see Zeitlin's little masterpiece head to Cannes and, if it does so, I hope they're brave enough to include it in competition there - I think it stands a chance of giving any film a good run for its money.

As you can imagine Beasts is a hard act to follow. But Robot And Frank is a charming and likeable comedy drama, offering a lot more than we've come to expect from mainstream movies featuring Alzheimer's. Set in the near-future, Frank Langella is perfectly cast as Frank, an ageing bookworm, whose memory lapses are starting to worry his kids (James Marsden, Liv Tyler). When they buy him a caretaker robot, he is initially enraged by the interference - "that thing is going to murder me in my sleep!" but before long he has formed an odd couple friendship with his new sidekick that offers him a way to break the law.

Director Jake Schreier and scriptwriter Christopher Ford go well beyond the initial fun of the robot conceit to craft a thoughtful film musing on both the ageing process and our relationship with technology. The robots themselves - including a chunky library bot named Mr Darcy - are cutesily retro, which only adds to the film's charm.

After the film, attended by writer and director, Langella, Marsden and Tyler, Langella was asked what it was like acting with a robot that wasn't there? Without missing a beat, he bent to the space next to him with the microphone and said: "Do you want to answer that?" He added: "That's what it's like," Langella laughed. "You just go into a place in your imagination."

My final film of the day was Stephen Frears' comedy Lay The Favourite. I should probably note that I was not at my best to watch this, as I was running an increasingly high temperature that would mark the onset of flu - not helped by the blizzard conditions that prevailed all day. As John Cooper himself put it before the screeing: "Thank you for coming. Thank you for the snow. Thank you for the chaos".

Stephen Frears added: "This is a very modern film - I finished it last Friday."

It's a telling statement and one that suggests it may not be too late to go back in and edit out some of the unfortunate flabbiness that exists in this tale of dizzy lapdancer Beth (Rebecca Hall) who heads to Vegas with a dream of becoming a cocktail waitress. A twist of fate sees her being taken under the wing of a local bookie, Dink (Bruce Willis), who discovers she has a surprising head for numbers. With Dink's wife Tulip (Catherine Zeta-Jones) increasingly jealous, Beth ends up quitting town for NY - a move that could see her fall foul of the law.

If that all sounds complicated, it is and it is matched in complexity by the bookie jargon that we're introduced to near the beginning. The problem is that the humour here - and there are quite a number of good one-liners - is frequently vying for attention with the sprawling plotline. The real Beth - who wrote the book on which the film is based - was at the premiere of the film - and it's remarkable how well Hall has captured her. Zeta-Jones also has some great fun with the charicature trophy wife Tulip.

Willis, however, never really settles in the groove. His lines always seem to be delivered just a little too knowingly, so that you never lose sight of the actor in favour of the character. Not a dud by any means but although the cast all appear to be having a whale of a time, it doesn't quite translate to the amount of laughs it ought to.