It's 1959. Shopkeeper's daughter Rose (Déborah François) is an independent young woman who dreams of meeing a man who is her equal - but, more importantly, of holding down a job that gives her control over her own life. What she lacks in confidence she makes up for in courage. She only really has one skill - she can type like a maniac - but using this, and sheer brass neck, she manages to convince an insurance broker to take her on as a secretary. For a week. At the end of that time, he makes a proposition - she can keep the job, at which she's mostly terrible, if she will let him become her trainer and agree to enter speed typing competitions.

Speed typing was a massive craze at the time, and these competitions were very much a real world phenomenon, a symbol of female achievement (albeit still very much on male terms). For Rose, discovering that she can be a winner at something is inspirational, encouraging further boldness in every aspect of life. For her boss Louis (Romain Duris), life is all about winning. He tells himself he's doing it for her, that the most important thing in his life is helping people, but his insecurity runs deep. Each of them profoundly irritates the other. And, of course, they are falling in love.

In a feelgood romantic comedy like this there are never going to be many surprises. That's what makes them so hard to write and so impressive on the rare occasions that they're done well. Populaire benefits from a savvy script with multi-layered humour and from superb work by its stars. Duris attracts sympathy to a difficult man while François is a stand-out, her nuanced performance mixing heartbreaking vulnerability with deft comic timing. There's an ever-present dry wit that keeps things from becoming too sugary, and it's mirrored in costuming and period décor that looks fantastic and is full of sly jokes.

With the visual style of the film also tailored to the period, director Roinsard has a lot to stay on top off. Even without these other considerations, it's difficult to make typing look dynamic. Roinsard uses every trick in the book to do so, from period split-screens to Rocky-style circling shots, and there's plenty of focus on cheering spectators; but he also knows when to sit back and let the actors take the reins.

Mélanie Bernier is particularly important as a reigning champion appalled at the thought of being unseated, and the glares exchanged across the keys are truly fearsome. This emphasises that focus on independence and personal achievement that ensures the women are more than mere male trophies, in so doing both enriching the story and adding a moe complex dynamic to interpersonal relations.

As audacious as it is charming, Populaire is a polished production with the potential to win hearts worldwide. Don't try it at home - speed typing left many of its early champions crippled for decades - but do seek it out on the big screen, and enjoy. 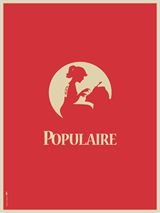 An insurance agent grooms a wayward secretary for a speed typing contest, and falls in love in the process.