It’s a phenomenon well understood by stage magicians: for the most part, most people see only what they expect to see. When Irene (Tessa Thompson), a well dressed doctor’s wife, travels into a well-to-do area of town in search of a birthday present, she is startled to be referred to by a white woman as a 'nice lady'. In the 1920s, such things do not usually happen and she’s startled to realise that she has inadvertently passed for white. Dizzy in the heat, she stumbles into a cab, and the driver recommends cooling off in an upmarket hotel. Even entering such a place takes some courage – enough that the staff don’t expect black people to try – and we sense her giddy excitement as she breezes through the doors, is ushered to a table and treated with a courtesy she has never experienced from white folks in her life.

It’s thrilling but it’s also scary. One doesn’t want to think about what might happen if she got caught. But this is still relatively lightweight stuff. Historians estimate that, in that era, the number of African Americans who presented themselves as white on a regular basis was well into the hundreds of thousands. Whilst most were 9 to 5 passing – presenting that way to make travel easier or to get better paid jobs – some lived that way full time. In that same hotel, Irene is shocked to meet old friend Clare (Ruth Negga), who has been living that way for some years and has married a white man. Clare introduces the two of them and the white man, unable to recognise the Jim Crow figure of his imagination in this elegant, well spoken lady, jokes about his hatred of black people right in front of her.

The source material for this is, of course, Nella Larsen’s 1929 novel of the same name, and although the timeline is contracted, Rebecca Hall sticks closely to the text. If you’ve wondered why a white woman is making a film like this, it’s worth noting that she passes, too – that is, according to laws in operation in the US in the 1920s, she would, on account of her ancestry, be classed as black. Larsen’s novel touches on this and on the fact that by that period, attempts to squeeze a diverse population into just two principal categories (Native people, Chinese immigrants etc. were classed separately) had become so absurd that one was often unable to tell whether people were black or white by looking at them. From this we get the literary figure of the tragic mulatta, a woman unable to fit comfortably into either the black or white communities, and Clare has aspects of this, but she also has a degree of agency and a commitment to self-determination which make her considerably more complex.

The role is a gift for Negga, who has always evinced considerable talent but has not previously had the chance to demonstrate her abilities to this extent. Hall shoots in black and white and uses subtle tricks of lighting and camera angle to alter the way viewers perceive Clare’s race in different contexts, an approach which is most noticeable in her initial scene where she transforms from archetypal blonde flapper into a person Irene can recognise as sharing her own background. Negga adjusts her accent and the way she uses her facial muscles accordingly, letting go of the stiffness and distance expected of white ladies when talking to the woman she is anxious to reacquire as her friend.

Other thematic elements in the book rely still more heavily on the actors. A moment during that first meeting when Clare pointedly rests her hand on Irene’s and Irene pulls away does a lot of heavy lifting. Though Hall gives us plenty of opportunity to observe Irene observing Clare, and to hear her talking about her beauty, this is often framed, as in the book, in the context of her jealousy and her fear that Clare will steal her husband (André Holland). The presence of that jealousy is important to understanding Irene’s choices towards the end, and the ambiguity of the final scene, which is framed in reference to silent films of the period, but it is Thompson who reveals the queer subtext: Irene’s obsession, her yearning, and her fear of countenancing such emotions.

Tangled up with this is the positioning of whiteness and beauty (and class) as intrinsically related qualities, which may be more obvious to some viewers than others (highlighting the difference in awareness which Irene implies when she says that she thinks it would be much harder for a white woman to pass as black). We don’t see much of Irene’s servant, Zulena (Ashley Ware Jenkins), but we see enough to emphasise this point. Irene has a beautiful home full of beautiful things, and the presence of the darker skinned Zulena helps to emphasise her status – arguably its own imitation of whiteness. Hall is careful to flatter her dark skinned characters so that viewers can’t overlook their beauty and become captivated by those illusions.

Holland is positioned as an object of desire for the camera as well as the women. The lively intelligence in his eyes and the fluidity of his performance (with none of the constant self-analysis the women are evidently engaged in) makes him an attractive character and also hints at the appeal that black society still holds for Clare. Whilst Irene is fascinated by her opportunities to observe the different life of white people early on, if one disregards the novelty, it looks really quite boring.

Focusing as it does primarily on Irene’s experiences and the moral challenges Clare presents to her (plus the secondary challenge occasioned by her husband’s insistence that their sons need to learn about racism as soon as possible), the film avoids resting solely on tension about Clare’s potential discovery and what it could mean. It’s a rich, nuanced picture of racial and queer issues at a point in US history when long-standing boundaries were breaking down under pressure of lived reality. It’s a testament to Larsen’s intellect that, in today’s similarly charged moment, this story still has so much to say that it vital and relevant; and to Hall’s skill - though this is her first work as a director - that she has realised it on the screen so effectively. Furthermore, viewers who know nothing of this history and context will still find it a moving human story. This is, quite simply, one of the finest films of the year. 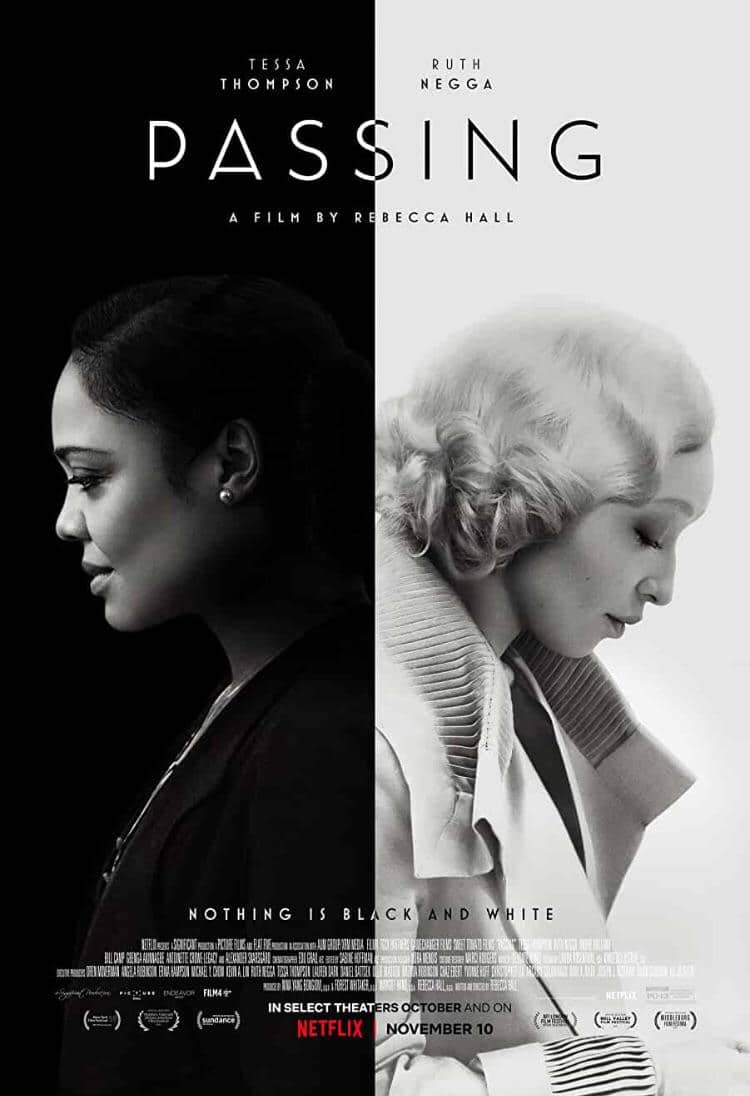 Two African-American women who can "pass" as white choose to live on opposite sides of the colour line in 1929 New York in an exploration of racial and gender identity, performance, obsession and repression.