It begins with the coal. A long, steady conveyor belt of it, at the heart of Chinese industry for over a thousand years. Rich and black, clouding the air with choking dust that gets everywhere, it segues by until, suddenly, an interruption: a pale object sitting at an angle within it. It gets closer. It's a human hand.

This is the prelude. It leads to an investigation, what seems like a discovery, and then a brutal yet beautifully filmed shootout, one of many surreal moments dotted through this film. This is the moment when two police officers are disgraced. We meet one of them years later, drunk, lying in the snow in frozen Heilongjiang. When he unexpectedly meets up with the other again, things begin to happen in earnest, because a fresh wave of murders has begun, with more body parts turning up in coal. Despite the fact that Zhang (Liao Fan) is no longer in the force, they begin working together to try and solve the case.

Black Coal, Thin Ice is a painstakingly deliberate neo-noir, heavy on atmosphere and taking its time to build. The focus is on character rather than plot, the latter being somewhat contrived, and Liao Fan, who put on a considerable amount of weight to play Zhang in the later part of the film, makes a compelling lead. Opposite him is Taiwanese stay Gwei Lun Mei as Wu, a young widow who seems to have a strange connection to each of the dead men who has been identified. There are echoes of Sea Of Love as Zhang grows increasingly obsessed with her, going beyond the bounds of his assumed duty in pursuit. He's not very good at it and she quickly realises what's going on, but like many a cornered femme fatale, her limited options include exploiting his desire - and maybe, just maybe, it's mutual. Then again, she could be a killer.

There's a lot here to like, if not quite to enjoy. Yi'nan Diao delivers some inventive set pieces and cinematographer Jingsong Dong has a distinctive approach to noir, bringing new character to old fashioned scenes. The problem is that at the point when tension shold be building most dramatically, an overcomplicated approach to plotting leaves the film feeling muddled and inconsistent. Sure, we can pick out what's going on if we try, but the act of having to, just to keep track in individual scenes, is enough to knock us out of the headspace that the film has worked so hard to create. It's one thing to share the confusion of the characters, another to share their frustration.

Exploring issues around misogyny, the exploitation of the poor and the damaging effect of anonymity in a society billions strong. Black Coal, Thin Ice has been a huge hit in its native China, but whether or not it will have the same impact elsewhere remains to be seen. 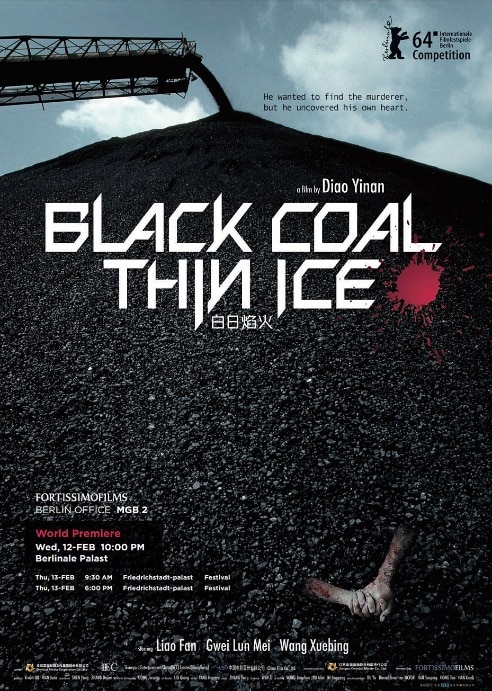 A detective falls in love with a woman linked to the murder victims of his current investigation.

The Girl With The Dragon Tattoo