This simple but effective action thriller proves you don’t need to rely on showy special effects, big star names or even a particularly elaborate plot to make a gripping movie. John Carpenter’s cult classic may be low budget, but more than 30 years on it remains brilliantly claustrophobic and eerily entertaining.

After the harrowing shooting of an innocent young girl (buying a Mr Whippy will never be the same again), the gang member responsible is gunned down by her dad. The shocked father then seeks solace at the derelict Precinct 9 (and yes, I did say 9 – the film’s title is actually a bizarre misnomer) which is on the verge of closing down. The skeleton staff there aren’t having a great night as it is, having been forced to deal with an unexpected busload of prisoners in transit. But things really take a turn for the worse when the angry gang lays siege to the station, causing the cops and criminals to unite in a desperate attempt to fend them off.

While the dark, confined setting of the precinct may have felt restrictive in other hands, Carpenter skilfully cranks up the tension, taking advantage of the contained space to create a real sense of being trapped. The fanatical gang members also add to the horror, swarming the building in a zombie-like state as they fight to the death. However, at the same time, the movie never seems to take itself too seriously, largely thanks to some great one-liners from smooth-talking con Napoleon (Darwin Joston).

On the downside, the plot raises some questions that it never answers (why is he called Napoleon?), and the highly acclaimed synthesised score now sounds a little dated, but these small issues don’t really detract from the overall enjoyment factor.

If you like your movies with an extra helping of Hollywood gloss, then you may also want to check out the 2005 remake, which throws some heavyweight actors (Laurence Fishburne, Ethan Hawke, Gabriel Byrne) and more plot twists into the mix. It’s surprisingly watchable, though it fails to surpass the original for sheer atmosphere.

All in all, Assault on Precinct 13 remains one of the best B-movies of all time – and definitely deserves a B+ for effort. 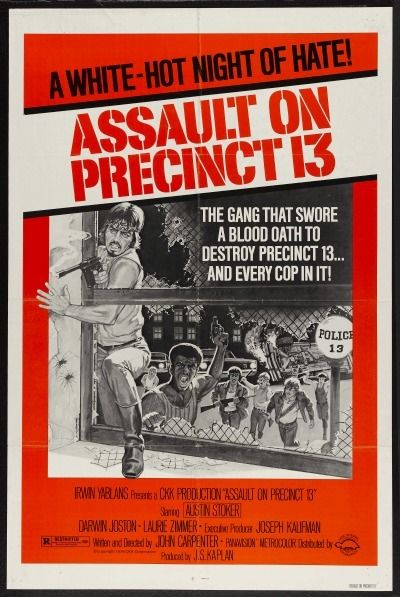 A police precinct comes under attack from a merciless street gang.