With its frank, intimate and revealing approach to gay sex, writer-director Robin Campillo’s documentary drama about a group of Parisian activists (many HIV positive) pulls no punches.

Over a series of scenes depicting the disagreements and infighting between the participants in the ACT UP meetings, Campillo shows the difficulties of people with the same interests and goals trying to come together for a common cause.

With a young, committed and mainly untried cast (apart from Adèle Haenel who was in The Unknown Girl from the Dardenne Brothers) there is a collective energy and naturalism in the performances.

Campillo, who made Eastern Boys and was himself a member of the ACT UP group in the 1990s, cuts between the public meetings and acts of protests and the personal relationships that develop between the likes of activist Sean (Nahuel Pérez Biscayart) and his lover Nathan (Arnaud Valois).

The director learned his skills by working with Laurent Cantet (the director of Palme d’Or winner The Class and L’Atelier in this year’s Cannes) has an accurate ear and eye for the volatility of group dynamics.

He has a weakness, however, in not knowing when to trim all the talking which, with the film’s running time of close to two-and-half hours, is far too protracted. The same goes for the sequences in night clubs to a loud house music beat.

The scenes that work best are the personal moments and the acts of protest such as the invasion of the laboratories of a pharmaceutical giant whose walls are splattered with pouches of fake blood.

It’s a heady mix of youthful bodies struggling for survival against such conditions as Kaposi’s sarcoma, lives needlessly lost and the indifference from those who should know better. 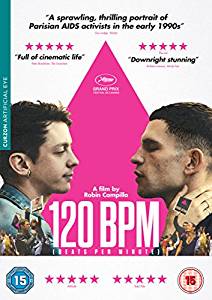 Portrait of the ACT UP activist group, a direct action collective aiming to impact the lives of people with AIDS.

Gay Sex In The 70s
The Witnesses
We Were Here