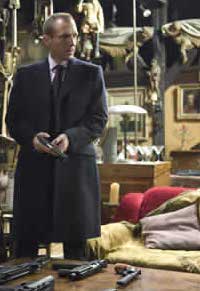 Bradford notches up its 14th film festival in 2008 and it continues to grow in stature year on year. Among the filmmakers celebrated with special seasons this year are Kenneth Branagh, Julien Temple and Christian Petzold

The 2008 festival runs from February 29 to March 15, kicking off with an opening gala screening of Martin McDonagh's In Bruges.

In The City Of Sylvia
A boy dreams of finding a lost love.

Lars And The Real Girl
A quiet young man falls in love with a woman who is perfect in every way - except that she's inflatable.

Diary Of The Dead
Film students try to record the end of civilisation as they know it when the dead begin to walk. Plus read our exclusive interview with George A Romero.

Redacted
Controversial story, asking where, in the censored war in Iraq, do we find the truth? Plus read what Brian De Palma said about the film - and the redaction of it, here.

You, The Living
Surreal, dreamlike, and darkly comic sketches about life and death.

The Cottage
When wannabe big-time crooks kidnap a gangster's daughter and hole up in a remote cottage, they find there are scarier people out there than the mob.

Garage
The life of a lonely petrol station attendant is changed forever when he is befriended by a bored teenager.
A-Z of Bradford International Film Festival 2008 reviews >>>

Mohamed Al-Daradji on shooting after the war
The director of Ahlaam and accompanying documentary War, Love, God & Madness talks about the experience of directing a film in modern-day Iraq.
Plight of the living dead
As Diary Of The Dead is released on DVD read our exclusive interview with George A Romero about zombies, the perils of the internet and a Sound Of Music remake.
How music changed history
John Sayles on Honeydripper.
Fresh cut of the blade
How Ridley Scott's sci-fi classic came to be sliced so many different ways.