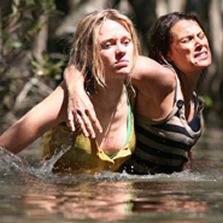 Horror movie Black Water is among the films screening

Now in its 14th year, the London Australian Film Festival prides itself on showing all the major Australian feature films of the year - and offers a great opportunity to get an early look at some upcoming releases. The season runs at the Barbican from March 6 to 16.

Good news for people who don't live in London, the Aussie films are going on tour in June and July.

The tour comprises feature film and documentary highlights from this year’s festival including the Audience Choice Award-winning comedy All My Friends Are Leaving Brisbane and Aussie actor Richard Roxburgh’s directorial debut Romulus, My Father.

Forbidden Lie$
A harrowing ‘true-life’ story about an honour killing in Jordan becomes a publishing sensation. But the author is not all that she seems. Touring.

Global Haywire
Quirky, partially animated documentary looking at the relationship between the East and West. Touring.

All My Friends Are Leaving Brisbane
Restless twenty-somethings can't decide whether to stay or leave or fall in love. Touring.

Unfinished Sky
An Afghan refugee hides out on an isolated farm in Australia.

Kenny
A day in the life of an Aussie toilet plumber.

Black Water
Three young adventurers find themselves stranded in a mangrove swamp with a killer crocodile waiting in the water.

The Home Song Stories
Chinese children grow up in Australia with their beautiful mother who was a nightclub singer in Hong Kong.
A-Z of FilmFest Australia 2008 reviews >>>

Roxburgh on Romulus
Exclusive interview with actor Richard about his directorial debut.
Festival frenzy
Travel the world from the comfort of a cinema, thanks to a host of international festivals this month.
Heath Ledger remembered
A look at the life of the star to whom the Australian Film Festival is paying tribute.