The director of Cactus talks about making the move from camerawoman to writer/director. 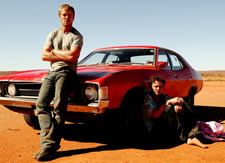 Jasmine Yuen-Carrucan’s debut film, Cactus – a thriller which sees an unlikely bond develop between a kidnapper and his victim on a trip into the outback – will close the 15th edition of the London Australian Film Festival this week.

Unlike many up-and-coming directors, who cut their teeth on shorts before tackling their first feature, Jasmine came with a wealth of experience behind the camera – having worked on films as diverse as The Quiet American, Kill Bill 2 and Mongol.

Jasmine admits that taking the directing plunge was “a huge leap”.

“In Australia, the normal thing is to do a short film and then try to do a feature,” she says. “But I think the problem is short film and features are two very different things. They are just as hard as each other in a way. I had done a few little bits and pieces, but nothing that I wanted to show anyone.

“I thought, you can spend a lot of money doing your first short film. So I wrote Cactus in a way that I thought we could just go out there and make it on our own, with a lighter, smaller HDV camera and just a handful of people. And instead of spending a lot of money doing a high-gloss short film I thought that I would try to do something feature-length so you get to do the whole narrative – which is more interesting to me – and spend the same money”

Considering that many filmmakers come to their first projects from a position of no cash, it could be argued that an even bigger jump into the unknown was required from Jasmine, since shooting Cactus meant giving up her ‘day job’ at least for a while, but she says that it was the right time for her to do it.

“It was either do it at that time, because I had money in the bank, or I would never get around to doing it,” she says.

“Eventually you can’t choose, you have to have a life and life costs money, these days. But at the time life was very simple and I had saved a lot of money, and I always knew that I was saving money to try to do that. It was like a choice, you would do that or you would put a deposit down on a house.

“I tried not to think about it too much, once I’d decided it was what I wanted to do. Of course, there were times when I thought, ‘what am I doing?’ but for the majority of the time I was just pretty good at blanking it out.”

Talking about the number of films at this year’s Australian Film Festival which see their directors also take on writing duties, Jasmine says she thinks many people – like herself – may well be doing this through necessity rather than choice.

“I would have loved it if someone had given me a script but I knew that no one was going to,” she says. “There was absolutely no reason at all why anyone should offer me a script, so I thought I just had to do it myself and just tried as hard as I could, basically. I just went by all the scripts that I’d written and all the films that I liked and what worked and everything like that. It was very difficult for me.”

This sort of double duty for directors can sometimes result in films which look fantastic but have flawed scripts. Jasmine suggests part of the reason so many opt for that route may not be down to desire as much as issues of funding [Read more about changes to Australian filmmaking funding and Jasmine's thoughts on it here].

“I don’t know if it’s hard making the connection between the writer and the director – people finding each other – but in Australia the other thing is that up until they changed all the funding rules, the way to live was to get money for development for the next project you were going to write.

“So, if you’re a director, you can’t just wait around for the two years or whatever between. I think that they’re such completely different jobs and the great thing about a director is being able to interpret a script – it’s not that they should always be separate but I wish there was more opportunity for that.”

Fortunately for Cactus, it turns out that Jasmine’s talents do extend to dialogue, meaning that her film is pretty accomplished for a debut piece. And it’s thanks to her script that she won the backing of Aussie acting veteran Bryan Brown – who liked it so much that he not only agreed to play a key role as a cop on the trail of the kidnapper, he stepped in to help produce the film.

“We had the script and sent it to him to see if he would play the cameo as the cop,” says Jasmine. “He said that he would if we could get proper money for it – well, more money than the no money we had.”

And Brian – along with her husband, cinematographer Florian Emmerich – were also instrumental in fine-tuning the screenplay.

“You need a few honest voices to tell you, that’s not really working or that’s a good idea, people you know understand what you’re trying to do and will help you in that way. Because sometimes you find people who will say, ‘Yes, that’s really terrific’, because they don’t want to hurt your feelings or they don’t really think about it that much, or other people who don’t really like your style, or something and say, ‘no, I don’t like it’.

“Fortunately Florian understood it and in the very beginning, I told him the story verbally and it was very different towards the end. It was a lot more mixed up. He was the one who said, ‘Look, it seems like it’s mostly about these two guys ...’ What I had was much more complicated. So it’s having people like him.

“And Bryan Brown was very good in helping me make the script stronger. In the same way that Florian really understood the story, he got it very early as well and that was very helpful. Once you have the script, I think – and it’s something that he said all the time – it’s the last five per cent of making the script better that will make it ‘good’. For 95 per cent, if the idea is good and everything, but if you can really work the last little bits and pieces and, of course, it can all change on the day and in editing and it’s the last little bits and pieces that really make the difference.”

The film finally cost A$1.1 million (around £517,000), with the tight cast and shooting environment helping to make the most of the limited budget. Much of the film is shot within the confines of the car, as the kidnapper (Travis McMahon) and his captive (David Lyons) begin to strike up an uneasy bond. Shooting in such a confined space posed some interesting challenges for the filmmakers.

“For the majority of the time I was in the front passenger footwell with a little monitor and a lot of the time the camera was hard-mounted and attached to the car somewhere to give it a more stable feel,” says Jasmine.

“There were times when the car was absolutely packed, with Florian and a focus puller and sometimes, depending on the direction of the camera, I would be in the boot. Very glamorous.”

The resulting film has an unfussy feel, a long way from some of the more hyper-kinetic camerawork that is proving so popular at the box office lately. Jasmine says her inspiration came from older films, such as road movies from the Eighties.

“I didn’t set out to make it with a style that was very contemporary with all the fast cutting and things like that and very slick, it was definitely not to be that because I didn’t think it suited the story.

“I think that if you do the drive, if you drive like that in Australia, once you’re in the car, you separate from the environment and I wanted it to be that once they got out of the car, that’s when the trouble could happen. So them being in the car became the safe haven that pushed them together. Because there weren’t a lot of changes in what you see in terms of landscape, I wanted to have a different rhythm from inside the car to outside the car.”

Although the film has yet to gain a UK distributor, Jasmine is excited about the opportunity to show it in London.

“It’s so great to be a part of this Australian package of old and new films. It’s nice because I have friends in London who have heard all the way along about us making the film, so it’s good to get an opportunity to show them. There is always this connection between Australia and Britain that is different from any other country in the world I think, an understanding.”

As for the future, Jasmine hopes that next time she will be part of a more collaborative creative effort.

“I would love to direct somebody else’s script,” she says. “That’s what I would really like to do. I really like the collaboration. I like filming because of the crew, all these people who do different jobs, who are working together to do this one thing and when you write it’s such an isolated thing, that there is none of this collaboration, it feels like at this very important point the bit that I really enjoy isn’t there.

“So I would really like to do that or find a writer that wanted to do something with me. I have an agent now and they have sent me scripts… but the good scripts go to the more established directors first.”

The way Jasmine is going, it won’t be long before she is one of those ‘established directors’ herself.