Thou Wast Mild And Lovely

Josephine Decker's follow-up to Butter On The Latch - and released in cinemas and VOD on the same day in the US - inhabits the same psychosexual territory as her feature debut, only with an more violent/primal aspect. Here, sex and even more innocent horseplay have acts of aggression on their fringes - an idea that is best when Decker lets it take a sinister scamper beneath the surface of events and at its worst when she feels the need to underline it, as in the opening scene where a father and his daughter Sarah (Robert Longstreet and Sophie Traub) wrestle, giggling, with a headless chicken.

The pair live on a farm in the middle of nowhere, the natural rhythm of their lives interrupted - as it appears to be every summer - by the presence of a live-in farmhand (that most indie of all individuals Joe Swanberg). He has squirreled his wedding ring away, one of several hints that not all is well on the home front, and the film tracks his growing attraction to the wild spirit of Sarah, who may or may not be quite the naif she first appears - "I would have a baby right now if daddy would let me," she tells the newcomer.

The woozy camerawork and impressionist feel of Butter On The Latch is reprised here, with the pastoral setting and psychosexual tensions calling to mind Carlos Reygadas' Post Tenebras Lux. While nowhere near as surreal or pretentious as the Mexican director's offering, it suffers similar problems. The plot may be clear and the tonal shifts from comedy to erotica and horror impressively handled but the character motivations are frustratingly fuzzy.

A surreal episode when we suddenly find ourselves enjoying the film from the viewpoint of a wandering cow, has an impressive sting in the tail, raising interesting questions about control - subtly emphasised throughout by shots of nature's cleverest invisible traps, spider's webs - but later developments and an equally dreamlike moment involving everything from a whisk to a pair of pliers feel more silly than smart. There is a sense of looseness to her dramas, but Decker is a thinker and here she has a tendency to over-think her themes, pushing her characters into situations which may well serve her exploration of sexual agency but which simultaneously make her narrative much less believable.

Despite great performances - Swanberg and Traub admirably ambivalent - the characters of the father and the farmhand's wife are not allowed to go anywhere. Still, if Decker may not yet be making perfect films, she is fierce and fearless in her approach and a more than welcome new voice in the American indie film landscape. 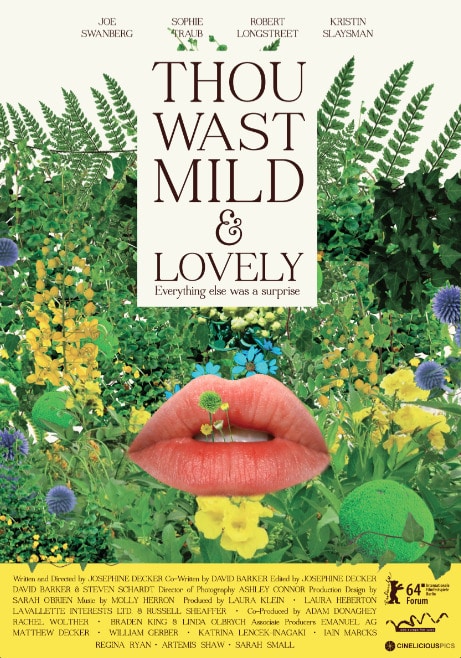 Romance - and trouble - brew on a farm in Kentucky.