Butter On The Latch

Josephine Decker's debut feature - which premiered in Berlin alongside her less affecting, more affected follow-up Thou Wast Mild And Lovely - is a fiction set against the documentary backdrop of a Balkan music retreat in the Californian woods. Wildness is a key theme of the film, although when we initially meet the main protagonist Sarah (Sarah Small) her sheer shrillness may be a turn off for many.

Decker and her cinematographer Ashley Connor provide an impressionistic vision of New York as Sarah walks up the street, screeching concern into her mobile phone to an unseen friend. This queasy, often deliberately out of focus camerawork serves to mirror the dislocation we will later see Sarah experience and it is well worth sticking with the film past its estranging opening 15 minutes, after which it becomes a much more engaging prospect. Time and reality are playthings to Decker, especially after Sarah heads out to the backwoods to surprise her friend Isolde (Isolde Chae-Lawrence). The retreat is a mixture of music and community, attendees sleeping in log cabins before sharing days of drumming, singing and communing with nature that run in to evenings of dance and a fair bit of flirtation.

Despite many of the film's pastoral themes, it develops into a psychodrama with a sharp surreal edge, as Decker mixes the inconsequential conversations of the girls - all impressively improvised - and their flirtations with the same buff boy (Charlie Hewson), who seems more than willing to enjoy both sets of attentions. Oddness is everywhere, from the way in which characters are often captured on the very edges of the frame, as though incidental to the natural world taking up the focal point, to the crazy, almost drunken camera angles sometimes employed. That is before you consider Decker's judicious use of strange dreamlike interludes, including a woman dancing in the forest and a scene which despite it merely being two women smiling is as sinister as anything I've seen all year. This is the forest realm of fairytales, where pathways can get lost after dark and primal instincts are liable to take hold.

The title, suggests someone perhaps oiling a door to keep the noise of down - an ambivalent idea that, like so much in the film, could be driven by benign or threatening desires. Decker's soundscape is every bit as important as what we see, with the music and ambient noise of the forest retreat layered in to shift or emphasise mood or deliberately obscure dialogue.

Both of Decker's feature films are characterised by intensity, for good and ill. Occasionally, there are moments of intense pretentiousness - signs of early days as a filmmaker that will hopefully mature more with experience - but when she hits on emotional truths, they are moments to savour. 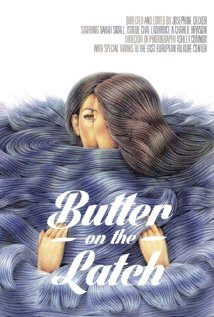 Primal instincts come to the fore when a woman and her friend visit a music retreat.