"Never such innocence, / Never before or since, / As changed itself to past / Without a word," wrote Philip Larkin in his famous poem MCMXIV. He was talking about a time ten years after the setting of this film, yet his words resonate very closely with its spirit. It is a tale about life on the cusp of change, in the late summer of childhood just before the chill winds come. Its three young heroes could not be more enchanting, and their childhood is the childhood of the modern era.

Adapted by Lionel Jeffries in 1970, this film captures perfectly the atmosphere of E Nesbit's much-loved book. Bobbie (Jenny Agutter, fresh from the television version), Phyllis (Sally Thomsett) and Peter (Gary F Warren) are an aspect of popular stories we don't usually see. 1905 was a time of soaring popularity for spy novels as ordinary people became intrigued by the international politicking which would lead to the deaths of so many. These are the children who are left behind when their father is arrested for espionage of which he is innocent. Out in the country with their shamed, distraught mother, not really understanding what has happened, they are left to their own devices. As such children might in any age, they take what opportunities they have to explore and learn about the world. The charm of the film is that despite this desperate situation they find a world of beauty and wonder.

Imagine riding on a train, glancing out of the windows, watching isolated places flash by - green fields, rolling hills, lonely embankments. These are the children who sit atop the fence watching back. With their own lives at a standstill they grow fascinated by the movement of the trains and by all the promise they seem to represent. This leads to some remarkable adventures and, at one point, to an act of great bravery that reminds us what children can be capable of. It's a salutary lesson in the age of ASBOs.

The Railway Children is gently paced and might seem an unlikely favourite for kids today, but it's so well made that it has an uncanny power to win over even the hardest of hearts. True, for these children hardship is represented by being able to have butter or jam on their toast but not both - they are very far from the deprivation in which many real children grow up, even in England's green and pleasant land - yet their emotional responses are completely convincing. Bold, never mawkish, they are easy to identify with. Though it's Agutter whose standout performance won most attention, there's solid work all round, with a string cast resisting the temptation to be showy and combining their talents to perfection. They give this relatively slight tale a depth and character that makes it unforgettable. 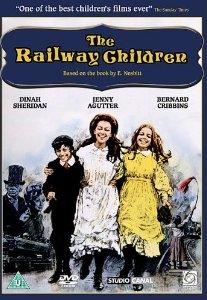 After their father is arrested, three Edwardian children are left to their own devices and become fascinated by the local railway line.

Writer: Lionel Jeffries, based on the novel by E Nesbit

The Railway Children
The Water Horse: Legend Of The Deep