Arch. Architectural. Anderson, Wes. "An air of promiscuous calm". A magazine, fictional, the magazine itself factual. Our subject, object, setting: The French Dispatch, originally Picnic, a supplement, its editor. An obituary, a travel guide, three features. Two key rules. No crying. Try to make it look like you wrote it that way on purpose. To know these is to be aware of differences between. To enjoy them is a different story.

Against 250,000 Francs a deposit of 83 centimes, a candied chestnut, 4 cigarettes. For the moment not considering the value outwith the walls of the asylum for either the artwork or the consumables, a fee just 99.99999668 percent shy of the whole. Not the only monetary indulgence, nor the only act of enumeration or categorisation or ludic construction.

Multiple narratives, stories within our imagined entity, within our imagined city or at least town. It may have a cathedral. The guide to its streets was more concerned with earth than any manifestation of the heavens, venturing into underworlds both extralegal and subterranean.

The number of additional writers. One we will deal with later. Maybe two. When I say 'writers' I do not mean characters, I mean people who, unless in front of the camera, are behind the camera. Jason Schwartzman, Hugo Guinness, Roman Coppola. It is nearly possible to arrange them simultaneously in and in reverse- alphabetical order. Let us be careful in this republic to avoid the word collaborators. These are other arrangers of elements. There are other arrangers of elements.

Two fugues by Bach. Jarvis Cocker under another name. Covers in the credits of incidents covered and unseen. Words rescued from the wastepaper basket, unforgotten, unremarked. Alexandre Desplat other soundtrack in a piece as full of songs (not really) as it is of scenes and sets. "A perfect sparrow" suggests some forms of art are and can be made 'properly' and a burnt matchstick requires a certain preparation.

Performances too. Performances two from many, one then, then a different one. To know this is to be aware of differences between. Character created not just from motion and movement but effort and environment. Walls line the books around them. Every office a portrait, every desk a diary, every word (as at least one author has said) meant to look like it was written that way on purpose. Think for a moment about what is involved in the wrong slide. "I'll have my drink now" and perhaps a slice. To have one's cake and to eat it, to be aware of the differences between. It all has a very particular flavour. Even a new one.

The clockmaker's four. In horology beyond the need for aesthetic balance there is an argument for a California dial that (in some cases) the mixture of the Roman, Arabic, symbolic makes it legible in any orientation. That does rather undo the old India-wallah trick of avoiding the calculation between London and subcontinental time by rotating the face one hundred and eighty degrees.

The cog is not the gear itself but the tooth upon it and teeth are upon it here, time is a wheel that rolls forward and back and up and down and, as on a bicycle, rings a bell and brakes. Other mechanisms beyond film-making. To quibble over what appear to be Thompsons (American, drum magazine, distinctive foregrip) when one might more probably expect MAT-39 (French, box magazine, distinctive folding stock) is to miss that it's meant to be understood more than it is meant to be accurate. That's understood as a liberal spray of "to whom it may concern", holes in plaster and more, rather than something delivered by hand.

At one point the subtitles (variously used) are not literal. Not "he has moved", perhaps, "he has played", though in the context given the severity (siege, armed) and the game (chess) a reasonable substitution. The idea there, surviving translation from (and likely to) French an element of a film where the idea of France (from, and by evident extension, to) is important.

The Cafe Sans Blague (No Kidding!) among the drinks provided. Oyster shooters are perhaps San Franciscan, affogato Italian, the mouthwash (by the pint) is domestic. Serrurie is 'locksmith'. This is the France of expatriates, one rich in colour and contrast except for when it is monochrome. This is not a real France but an ideal of France, a hyper-France as France's Baudrillard will have it now and will have been going to have it in the then that is now Dispatched. This is Ennui-sur-Blase, a river from which a non-integer constant of bodies are fished each year despite changes to population and demographics.

This is a formal France, not just the business of contracts and gallery openings and executions and parole hearings and shoot-outs and car-chase and barricades and dinner parties and student protests and poisonings. This is a formal France of editing and invitations and staging and structure. Like a fresco the art is fabric and foundation and (one must admit) somewhat of a 'fuck you' to the intended audience.

This is also a period piece. The past is a foreign country. Hartley's Go-Between is contemporary too. This is a different place, not just the arches of a different architecture but the archness of an auteur. Add to that an era where people not only wrote but read magazines, when newspapers had money and classified advertisements (not necessarily in that order).

There is some. Language too, though mostly French and English. Not always in the places or configurations that one would expect, but primal and various are the needs beneath the artifice. One can imagine at each rung of Maslow's hierarchy a table set by our director narrowing from deficiency to growth in some arch hieroglyph of familiar faces. One does not need to imagine a mother knocking at the door or a dispute over the utility of an appendix. One might need to imagine new muscles.

We do not need to see it to imagine it. We can see what has been imagined. Beds have bodies in and upon them. Books line walls. In every environment is a projection

Anderson (see also previous (III)), distinct from Paul Thomas (The Master) or Paul WS (Monster Hunter). This is his tenth feature film, and in my notes I had written to myself a suggestion that I avoid the words 'troupe' and 'mannered' and 'self indulgent' but here we are. I must admit that I do not think this will convert anyone who is not already a fan as it is as much an extension of what this Anderson does as anyone else would achieve were they to set out to do much the same thing with nine sets of practise and a set that had practised at least some times across those nine.

Sets constructed to allow tableaux vivant, surreal ascension. Shots above, below, with, to, at. Black and white, typography, manuscript recalled in speech, animation at once of Chris Ware and New Yorker covers and Hanna-Barbera's pursuit (various) of Columbidae Columba livia rustica by Dastardly, Richard et al. A credit "model airplane built and operated" which may have been the Douglas DC-3 (Basler BT-67 / C-47 Skytrain / Lisunov Li-2 / Nakajima/Showa L2D) that appears in an interrogation scene. It might also be the counterfactual flying boat or the artillery transport that appear in cutaways (both senses) though those more resemble stages.

Stages too, a moment recalled not as the story recalled but as the play based upon the moment upon which that recollection was based, still moving as I hear them saying "still not moving" even as an unseen hand in a not yet ancient land is chiselling the second O for Ozymandias. Projection, production, promotion, promises unkept and profundity lost to poor penmanship.

A room of spirals, a bribe tally (split screen), the sign that says FLOP QUARTER, a quantity of Citroen H vans shot in such a way that they might not be the vehicles themselves but the trailers made simulacrum because those corrugated slab-sides and those paired chevrons have become as synonymous with food as certain golden arches, smoking of course (it is the past) and models and stages and more. All of it at once a surprise and delight and entirely in keeping, threads woven through and elements repeated in a structure that intends to impersonate and is as much of play as purpose.

A bit of a fish. In Swedish they use 'slut'. To know these, as we suspect Steinbeck did, is to be aware of differences between. To enjoy them is a different story. 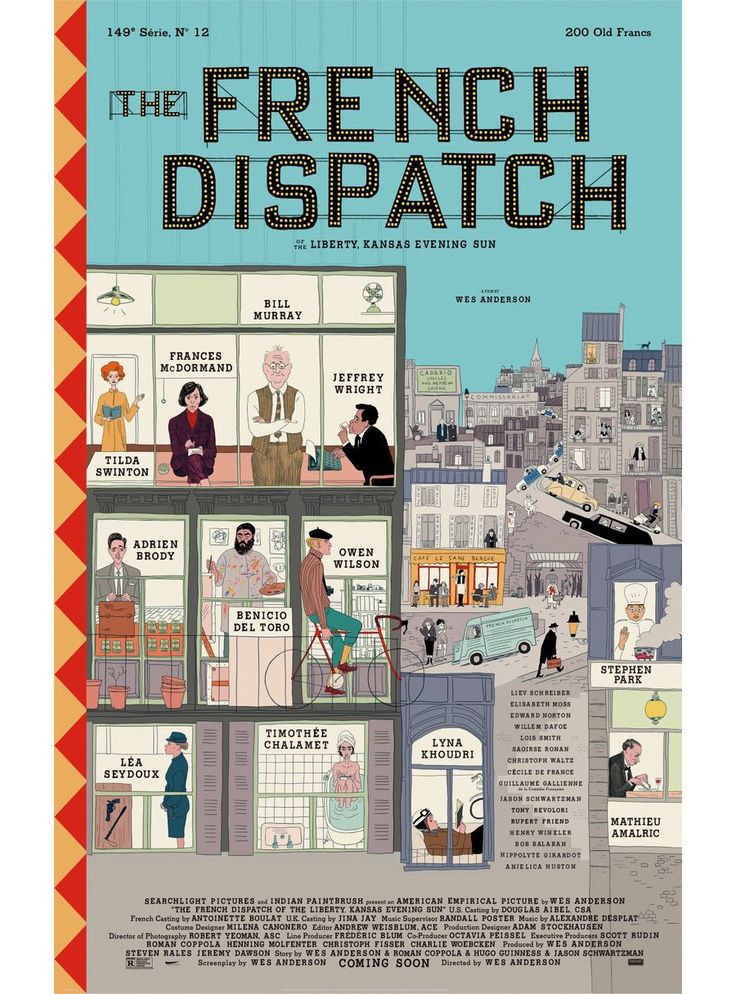 A love letter to journalists set in an outpost of an American newspaper in a fictional 20th Century French city that brings to life a collection of stories published in the French Dispatch magazine.