The First Death Of Joana

Joana (Letícia Kacperski) is 13 – old enough to know that adults don’t always have the answers to her questions, young enough to become easily obsessed by small mysteries nonetheless. When her great aunt dies and family members and friends begin to share their memories of her, Joana starts to think about her in a new way, understanding that she was a separate person with a life independent of her own. One detail of this life confuses her: why did her great aunt never marry or have a boyfriend? Her decision to investigate will take her to unexpected places.

Going into this, one might expect a simple story about homophobia and family secrets, but Cristiane Oliveira has created something at once subtler and more expansive. Joana is not a full time detective – she still has to go to school, do her chores and deal with all the complications of growing up. Her best friend, Carolina (Isabela Bressane) teases her about her quest, telling her that she lacks the courage to be an investigator when she won’t even ride her bike as far as the windmills on the horizon. This her mother has forbidden her to do. Going across the highway is dangerous, she says. It would be different if Joana were a boy.

There’s a lot of this. Her awareness of social interactions developing rapidly in response to the changes in her family life, Joana is gradually able to make sense of the restrictions she lives within. Her anger at gendered rules comes to a head when she is physically bullied by a boy and then punished for punching him. She begins to suspect that her mother’s attempts to make her behave in a more feminine way have more to do with a personal longing for romance than professed concerns about her not having a boyfriend. Her mother disapproves of her spending time with Carolina. Others gossip. The thing developing between the girls is obvious to everyone except Joana.

There’s a lot of narrative depth here, with complex, well established relationships following their own logic even though, sharing Joana’s perspective, we see them only in glimpses. Bruno Polidoro’s cinematography gives the film an airy quality which enhances the sense of possibility even within Joana’s small world. The windmills and the highway are constant reminders that there is more beyond the horizon, waiting for her to extend her imagination.

Drawing out natural performances from her cast, Oliveira draws the audience into that complex space where girls are testing the waters of adulthood, not so much coming of age as beginning to decipher what is wrong with life lived on an older generation’s terms. Joana is interesting because she’s not precocious, not a leader, and not the world’s greatest investigator, but an ordinary girl whom we come to value as she learns to value herself. Her narrative comes into its own as she imagines her great aunt’s and recognises that there are things it’s never possible to know. Life finds a way.

The First Death Of Joana is part of Newfest's 2021 line-up. 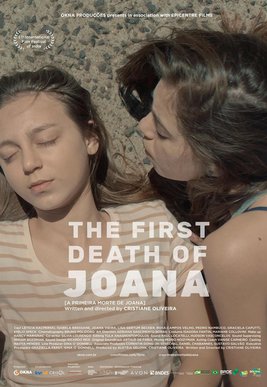 Joana, 13, wants to find out why her great aunt died at 70 without ever having dated anyone - but she uncovers more secrets than she expected.