What makes the perfect servant? In Gosford Park it’s said that it’s the gift of anticipation. Others will tell you, however, that it’s silence. The girl who has come to help Delyth (Caroline Berry) with the preparations for the dinner party doesn’t get everything right – at times she seems a bit lost – but she barely speaks at all. This makes it easy for the guests and household members to ignore her, or to project whatever they want onto her. From time to time she sings in a sweet voice, and though there’s a hint of melancholy to it, it suggests that she’s finding satisfaction in her work, that she’s glad to be in this place.

The dinner party is not for any specific special occasion. Rather, it’s a chance for Delyth and her husband Gwyn (Julian Lewis Jones) to celebrate having their two sons back in the house and to entertain Euros (Rhodri Mellir), the man who has made them rich by extracting minerals from their land, whilst introducing him to their neighbour Mair (Lisa Palfrey), whose land has also caught his interest. Everybody here has a secret; several have competing agendas. The girl, called Cadi (Annes Elwy) pays respectful attention but stays in the background whilst they talk about architecture and pour the wine. She’s from a very different world.

There are still very few Welsh language feature films being made so it’s a pleasure to see one which has benefited from so much care and attention to detail. Although structurally it’s fairly simple, with plenty of clues early on to help you figure out something of the danger behind the scenes, it’s well paced and neatly delivered. The brutality we witness in brief glimpses as plans begin to go awry contrast very effectively with the cleanness and modern elegance of Delyth’s home and the dinner party setting, whilst thematically the theme contrasts profit and luxury with environmental destruction, and contemporary capitalist thinking with traditional ways. There’s a struggle for the soul of Wales underneath it, raising questions about who its people want to be and about the cost of rushing to adopt a lifestyle which people all around the world are discovering is unsustainable.

Tied in with this are ideas around class difference, the ruthlessness of the aspirational classes and the treatment of women – especially lower class women – by privileged men. The way that director Lee Haven Jones frames male and female characters is intriguing, with classic gendered shots reversed to present Delyth’s cyclist son Gweirydd (Sion Alun Davies) as a sexual object (which becomes disturbing in light of what we later learn about him) whilst showing us Cadi’s shoulders working under her shirt, her strong legs, her physical agency. In the one scene where we see her panic, she moves like an animal, wild and startled rather than fragile.

In contrast to these very physical figures, Delyth’s poise is almost artificial, complemented by her clothes, jewellery, make-up and accent; everything about her is confected to send a particular message, something which becomes still more apparent when we learn that she grew up alongside the very different Mair. Their reactions to a windowless room invite us to reflect on interior and exterior worlds, but it is the discovery of another interior space, unexpected, that takes us beyond the stuff of local tales to hint at something much more primitive.

Elwy is the standout in the capable ensemble cast, telling us a great deal with her silent glances, her tiny flickers of emotion. She’s the still point at the centre of a whirl of activity, internalising the divisions found elsewhere, waiting for her moment. The Feast, which screened at Beyondfest 2021, will leave you hungry for more. 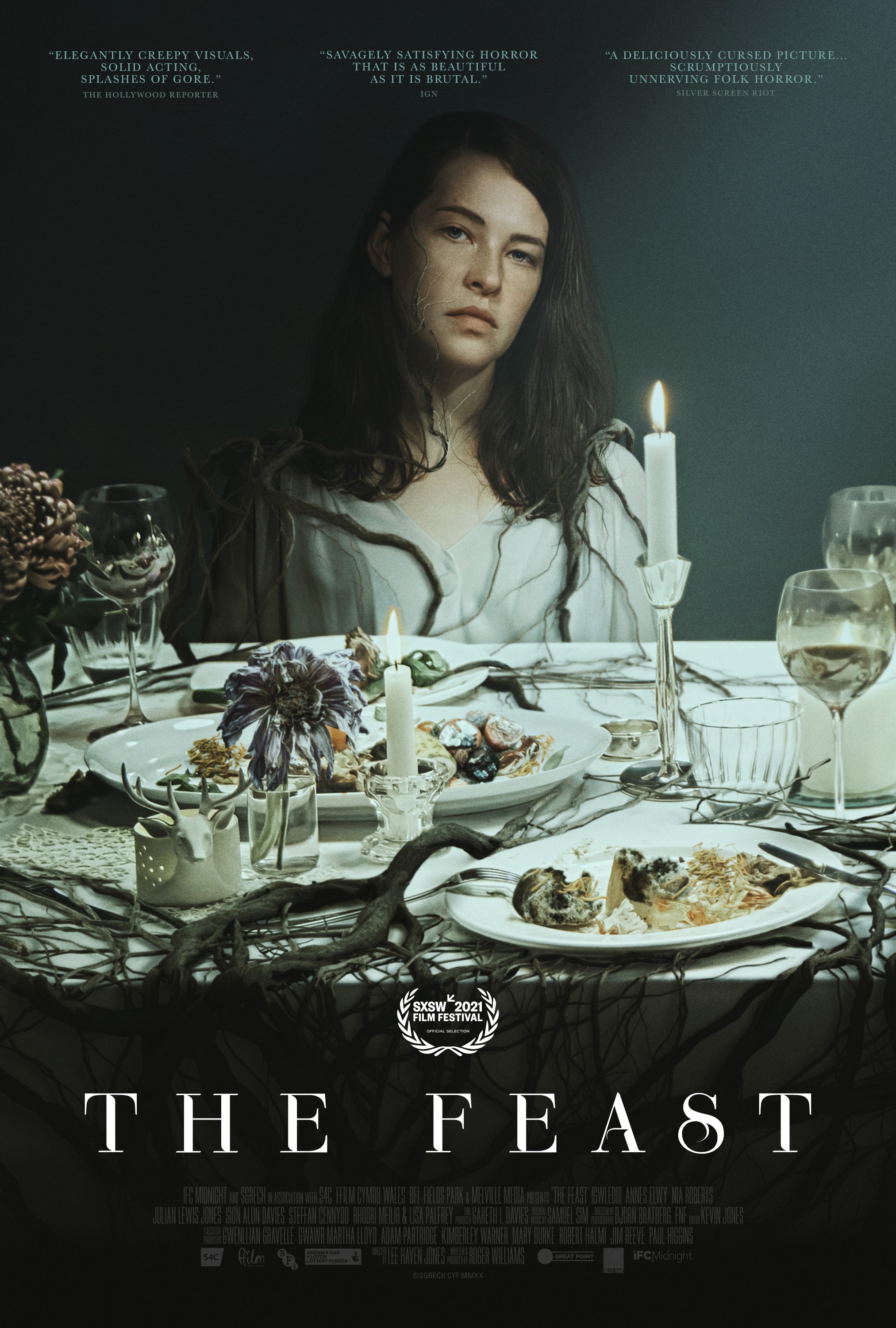 Over an evening a wealthy family gathers for a sumptuous dinner with guests in their ostentatious house in the Welsh mountains. Served by a mysteriously disturbing young woman, the assembled party do not realise they are about to eat their last supper.