From cars to cameras to videotapes, items of clothing, mirrors, games and more dolls than you can shake a stick at, cinema is full of cursed objects. They’re frequently used as gimmicks by filmmakers who have little else to offer, so it’s always a pleasure when, every once in a while, a genuinely impressive film of this type comes along. Patrick Ridremont’s second film may have an unimaginative title but that’s just about the only place where it falls short.

Let’s begin with the calendar itself. It’s not the popular paper type that sees kids screaming every morning because they want to open more than one door, but a hefty antique German creation handsomely carved from wood, with what sound like internal clockwork mechanisms. It’s designed for annual re-use, and when Eva (Eugénie Derouand) receives it as a gift from her best friend Sophie (Honorine Magnier), it comes with a set of ominously worded rules threatening death if it is thrown away or if doors are not opened as they should be. The young women laugh this off; viewers know better. But this isn’t just another film about characters gradually figuring out what viewers know and then panicking. It follows a much more troubling moral path.

Eva is a former dancer who has lost all sensation in her lower body following a car accident. She still leads an active life. She’s a strong swimmer, she holds down a job and she lives independently. She’s still at a stage where she doesn’t see much of a future for herself sexually (long term paraplegics will tell you that there are ways to work around those difficulties) but she’s nevertheless open to the possibility of romance, at least in her better moods, and she enjoys nights out in Sophie’s company. When one such night turns sour, however, leading to an unfortunate encounter with a man who doesn’t respect her boundaries, it is her calendar that seems to grant her revenge. Viewers will understand why she’s not exactly devastated to learn what has happened. Things become more complicated, however, as she realises that this sacrifice has given her access to a gift; and that she might be willing to make more, even if they include people she cares for.

The cliché of the disabled person who is bursting with resentment and easily tipped over into malice is obviously deeply problematic. We see these characters in films all the time, but Ridremont has done something a little different, subverting the stereotype, because Eva is such a well rounded character whose disability does not dominate her life, and because he makes her easy to identify with. She feels less like a bitter person out to harm others than like somebody who is simply trying to survive and thrive in a world whose hazards are familiar to all of us; and if she crosses a line, it’s such a subtle process that you may well find yourself going along with her or even making excuses. Most importantly, it feels like a product of who she is as a person, under malign influence, rather than a natural consequence of her disability.

Because we’re so close to Eva throughout, an external influence is needed to counterbalance this. It appears in the form of William, a nurse whom she meets in her local park and likes the look of. An inspired performance from Clément Olivieri makes him a powerful presence in the film even though he initially seems to be no more than a love interest. Eva’s disability is not exotic to him, something else which helps to normalise it in the eyes of viewers. He doesn’t see her life as inevitably tragic and, as such, highlights the fact that she has choices. His presence is an antidote to the film’s grim tone and increasing sense of movement towards an inescapable conclusion, but will the spirit inhabiting the calendar – what one might call das Ich - tolerate this?

Ridremont does a superb job of creating atmosphere, aided by Julia Irribarria and Eve Martin’s richly detailed production design. From the calendar itself to Eva’s home and the pool where she swims, every location tells a story. The score might at first seem too heavy but suits the style of the film well and will help to keep you on edge. Ridremont knows exactly when to relax the tension at the film’s climax, inviting viewers to experience a differently disturbing sensation. The violence in the film is constructed largely through symbolism, implication, and what we see in its aftermath, but is no less disturbing for it.

Derouand gives Eva a stubbornness and sense of purpose which speak to a past focused on training, but we also see a lighter side of her in scenes with Olivieri and Magnier. The calendar and its assortment of candies and tokens is beautifully worked out. The spirit, when we see it, is not especially unusual in design but is given tremendous presence by Ridremont and by composers Thomas Couzinier and Frédéric Kooshmanian. There’s a sense of dread here rarely found in modern horror. Ridremont has created a complete world, and one that’s easy to get lost in. 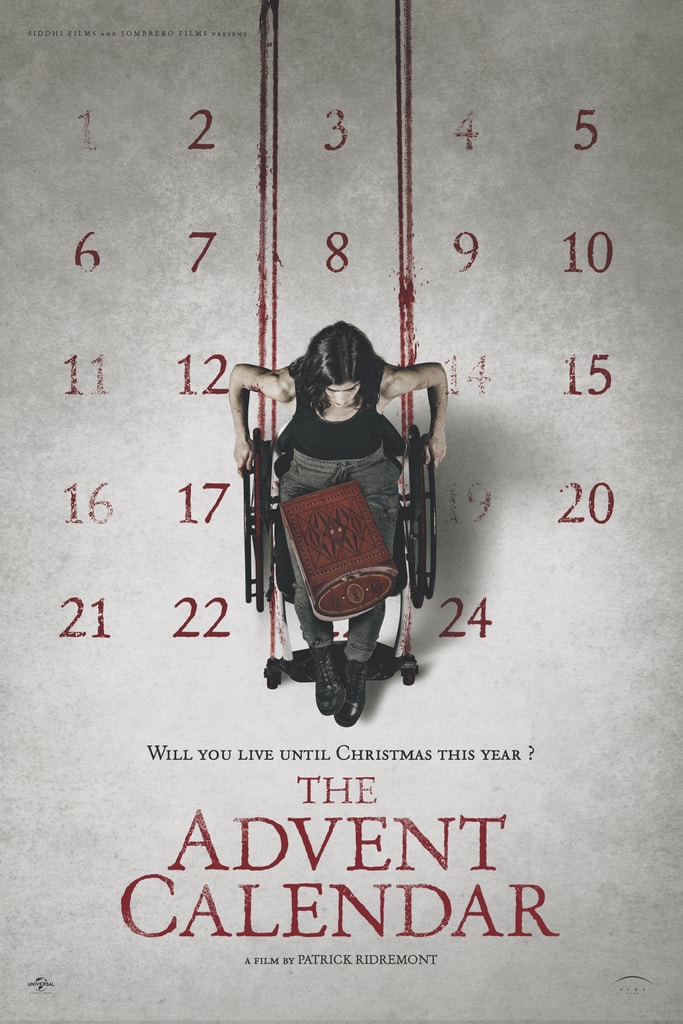 An ex-dancer who now needs a wheelchair is given an old wooden antique advent calendar before Christmas. She realises each window contains a surprise that triggers repercussions in real life: some of them good, but most of them bad - so she will have to choose between getting rid of the calendar or walking again - even if it causes death around her

It Follows
The Pact
Ring