It seems particularly apposite that mum and daughter team Agnieszka Holland Kasia Adamik have co-directed this quirky film, since it has the ungainly but attractive ambience of an old fairy tale being passed down through the generations, becoming more and more embellished on each retelling. The specific tale of Little Red Riding Hood is also embedded within the film, both in explicit reference and by occasional camera close ups that could easily prompt a viewer to think, "What big teeth/eyes you've got".

The setting itself also evokes a world of once upon a time, with a little old lady who lives alone at the edge of the woods as its protagonist. Janina Duszejko (Agnieszka Mandat-Grabka) enjoys her mostly solitary existence, finding plenty of companionship from her two dogs, the world of nature on her doorstep and the world of astrology in her mind, while teaching kids, part-time, in the nearest small town how to speak English.

It's not unusual for older loners to be viewed as eccentric, but Duszejko - "Never call me Janina" - fuels the fire by being an outspoken supporter of animal rights, penning frequent letters to the local police about out of season hunting and a cruel neighbour who keeps caged foxes, but hearing nothing in return. When her dogs disappear, she's sure the hunters are behind it but then the two-legged victims start to pile up.

There is a free-wheeling energy behind this adaptation of Olga Tokarczuk's Drive Your Plough Over The Bones Of The Dead, one of the more genre-bending films at this year's Fantasia. With suspicions hanging over everyone from her neighbour (Wiktor Zborowski) with a worryingly large basement to the local mayor, there are shades of Miss Marple about Duszejko but there's also a more off-kilter vibe to her dottiness that drifts back towards those women in fairy tales. While the film takes us on a deliberately meandering path through the woods of its mystery - a mystery that we are invited to solve long before it is 'revealed' - it is never less than absorbing.

The atmosphere created by the directors is also unusual, mixing sinister moments with bright flashes of the absurd - embodied by an enormous stuffed bird intended as a gift. The film is set across a year and Holland and Adamik put the seasons to work, shifting the colour palette from the brittle tones of winter to the vibrant greens and yellows of summer, while also adjusting the mood from the coldness of killing, to the heat of summer romance and back again.

Again and again, we're called to consider man's relationship to the natural world, the things we do to it and our shared common urges. Just as in nature, there are passing fancies along the way, that Holland and Adamik sometimes consider briefly, but move on from. Rather than being distracting, this adds to the overall texture of the film, suggesting stories happening in the town that we can only imagine. Holland has done quite a lot of television work lately, and it seems to have given her confidence in the manipulation of subplots - although this film could easily have found life as a television show, if that had taken her fancy.

Mandat-Grabka is essential to Spoor's success, keeping her character believably cuddly but allowing her to passionately go off the deep end when it comes to her beloved animals. There's no doubt the subsidiary characters - including an epileptic police IT guy (Jakub Gierszal) and a local emigre (Patricia Volny), who also suffers at the hands of a hunter - are less well-realised than Duszkejo but there's a sense that some of this is deliberate. This is her story and her perspective - and the film is filled with her rebellious spirit. 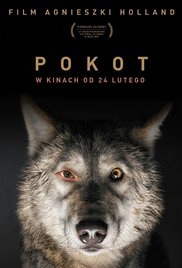 An elderly woman is convinced she knows what lies behind a spate of mysterious crimes... but nobody will believe her.