A young trucker reaches a mining town in Western Australia in the middle of the night. He walks in on the local pub owner and several of his friends struggling with a dog with strychnine poisoning. Over the course of the night, many of the town's inhabitants relate their stories with Red Dog and while each of them is personal, together they paint a picture of Australian small town life with all its ups and downs. Kriv Stenders' film is based on the true story of Red Dog, who is famous throughout Western Australia and even has a statue erected in his honour outside the real Dampier. But the film is not simply a sentimental story of a dog's life; it is a love letter to rural mining Australia and its lust for life.

Very Australian in its bright, wide visuals, Red Dog shows the lives of various immigrants as well as the town's Australians. It is not origin that matters in Dampier, but character. The cast do a splendid job of portraying the rough and tumble inhabitants of the mining town, each with their own problems and desires. The film has a fantastic Seventies soundtrack that would make most road movies jealous and the costumes are spot-on. It also features Bill Hunter in a cameo that happened to be his last role.

Just when the film runs into danger of turning too sickly-sweet, it takes a well-executed turn for the tragic, which rounds the story out in a way that a happy continuation could never have. The only two niggles I could find are a spot of dodgy CGI when Red Dog fights his nemesis, Red Cat, and a scene that shows Red's far-reaching travels, which is drawn out to almost ten minutes and feels a little like it was commissioned by the Western Australia Tourism board. But neither of these are enough to stop the film from being thoroughly enjoyable.

In the end, Red Dog is best summed up by a speech given by one of the characters: it is about “somebody that lives and breathes this vastness, this desolation. Men and women who understand the meaning of independence and the importance of a generous heart. Mates who are loyal by nature, not design, and who know the meaning of love and loss”. 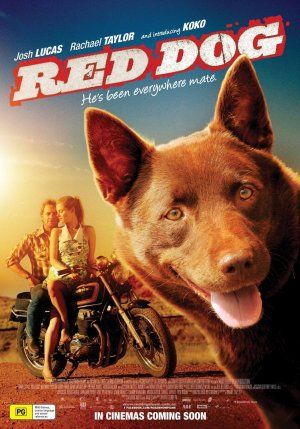 The story of a Western Australian legend and the tough, warm, independent people whose lives he touched.