Notable as the film acting début of the young Sidney Poitier and for taking on race and class issues that were highly sensitive for US audiences at the time, No Way Out retains much of its dramatic power today. It's a taut little noir with well drawn characters brought to life by some of the outstanding talents of the era, and its depiction of internecine strife at the heart of America is no less relevant now.

Poitier, terribly fresh faced and bright eyed at 23, plays newly graduated doctor Luther Brooks, a talented young man whose colleagues are proud to champion his work in a mainstream hospital (as opposed to one of the 'coloured' hospitals that were the only option for most African Americans at the time). Unfortunately, even the most talented of physicians sometimes encounter cases in which their powers cannot prevail, and when a young white hoodlum dies in Brooks' care, the man's brother, Ray Biddle (Richard Widmark), is convinced that he was the victim of a racist murder.

Though Brooks is sure that an autopsy will clear him by revealing that the dead man had a brain tumour, he can't arrange for one without Biddle's permission as next of kin. Meanwhile Biddle, arguing that he has been denied justice, rallies his impoverished local community to attack the adjacent black ghetto; and the ghetto dwellers, in turn, prepare to head off the threat. As his superior Dr Wharton (Stephen McNally) tries to expose the facts of the matter, Brooks wrestles with his conscience - innocent as he believes himself to be, should he surrender himself to keep other lives from being lost?

It's difficult to play a good man beset by aggression and keep an audience interested, but Poitier is consistently engaging in a role that doesn't really give him much screen time to work with, and it's not surprising that it launched him as a star. McNally provides a more conventional male lead in the noir tradition, and Linda Darnell simmers as the dead man's conflicted ex wife (Brooks is given a wife who has little to do except reassure the audience that there's no prospect of interracial flirtation). It's really Widmark's film, however, as he brings both complexity and emotional weight to the racist, misogynistic Biddle, a man who resents everyone around him yet seems most determined to torture himself.

Mired in self pity and with a sense of entitlement way out of proportion to his concern for others (including his brother), Biddle flails at the world, achieving little, incapable of or unwilling to make any useful analysis of his situation. Though it shows him little sympathy, the film invites us to understand him as a product of poverty and social neglect. In a key scene, we see him unable to respond to a ringing phone in a way that could get him out of trouble because his lack of education and lower class accent would immediately expose him. His recognition of this forces a brief, unwilling acknowledgement of his own tragedy.

With Poitier's combination of charm and easily relatable frustration, it didn't take much more to put viewers of all races firmly on his side, even in 1950. The film's insights into racial politics, however, go beyond the simple respectable black man versus thuggish white man set-up. Director Joseph L Mankiewicz (who also co-wrote) carefully reveals the way that racism is rooted in unfamiliarity. Only in exceptional circumstances do the poor white characters interact across racial lines and get to know black people. The rich white characters, however, find it easy to recognise black people's humanity because they come into contact with them all the time - as their servants. The irony of this is enhanced by the observation that Brooks can only really hope to make a decent living in medicine by tending to the needs of white people.

Mankiewicz also points up women's struggles in the course of the story, with neat asides about the way domestic violence is routinely ignored by neighbours and the way lower class women trying to better their circumstances are routinely assumed to be sexually available. Darnell is highly effective as a woman who has had her spirit crushed by the world more than once yet, despite limited education and insight, persists in trying to find a way out; and the title, ultimately, might refer to cycles of violence in America at large. The director's evocative camerawork reveals many intersecting worlds through which the characters must navigate. Brooks' struggle is only part of it. 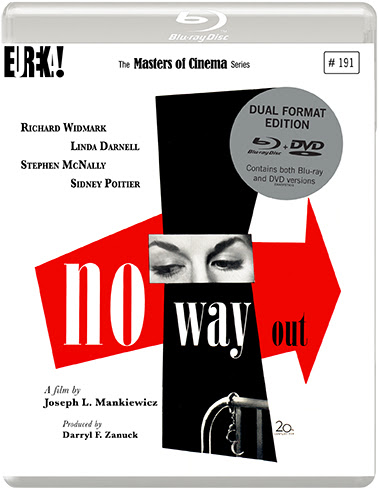 A black doctor is assigned to treat two white racist suspects who are brothers, and when one dies it causes tension that could start a race riot.

In The Heat Of The Night
Tragedy In A Temporary Town