When Gareth Edwards' Monsters exploded onto the scene in 2010, it breathed new life into the alien invasion genre, delivering a rare breed of socially intelligent science fiction focused on human relationships and the relationship between humanity and its surroundings. Edwards, however, has moved on to pastures new and it has been left to TV director Tom Green to deliver the sequel. Though Green clearly has ideas and wisely chooses not to add too much to the monster concept, he falls a little short of the mark in what is very much a film of two halves.

This time the setting is the Middle East, where the monsters of the first film have now spread. For those unfamiliar with them, they are not what's commonly thought of as an invading force; they don't show a great deal of interest in humans or their infrastructure, but have a habit of destroying it incidentally as they move around according to their own mysterious tropisms. Their sheer size - when adult - makes them a serious destructive force, and as there have apparently been no successful attempts at communication, the American army has resorted to bombing them. This hasn't gone down too well with the locals, however, as they feel getting their houses blown up is at least as big a problem, so now ground troops are needed to quell an insurgency. Enter our heroes, fresh from the streets of Detroit (looking at which it is difficult to tell whether or not the monsters have reached North America). With little relevant training and no Arabic, they're there to win hearts and minds, prevent attacks on the base and generally try not to get killed.

If Green set out to get close to the reality of war in the desert, he has succeeded insofar as most soldiers report long periods of sitting about in the dirt with not much happening. Unfortunately this doesn't make for very interesting viewing, the young soldiers have little depth and narratively there's really no need to subject viewers to 40 minutes of this before the plot begins to develop - the necessary introductory work could be done in far less time with no loss of impact. The only really commendable work in this part of the film is the weaving of the monsters into the background; Green, like Edwards, presents them as a fact of life, and the effects work is neatly done so that they simply become part of the landscape. You'll find yourself straining forward excitedly when they pass by, like a child on a long car journey looking out for horses.

It's in the second half of the film, when a rescue mission goes awry, that the film comes to life. The combat footage is overfamiliar and the same might be said of the macho disintegration character dynamics, but the merging of this with the context provided by the monsters creates something new. As in South America in the first film we get the sense that it's the nomads, so often dismissed as primitives, who have adapted best to the situation, simply replacing one dominant culture with another. The isolation of the soldiers, far from their families and social landmarks, makes them acutely vulnerable as the balance of power shifts around them. One is reminded of the many combatants who find religion in situations like this, and the monsters themselves begin increasingly to seem like gods, the more so because of their unknowableness and disinterest. Is this, itself, part of the survival process, humanity coming to terms with its smallness?

Whilst Green clearly want to compare the impact of war and cultural domination on the aggressors and the locals, what emerges is something that's at lest as much about evolution and the role of consciousness within it. The monsters themselves remain strangely beautiful, their voices haunting. The film should have amounted to more than it does, but it still contains some powerful material. 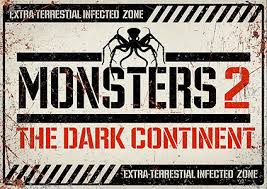 Sequel sees a soldier enter an infected zone in the Middle East to find his comrade.