You remember Mindhorn, yeah? A staple of tea-time telly in the 1980s, that one show that was about a detective and wasn't Bergerac, that one with the guy with the robot eye that let him see the truth, like a steeply discounted Six Million Dollar Man. I think I heard it once described as "like Robocop but if Murphy hadn't been a cop in Detroit but had instead been Hamish Macbeth", and it's still a pub quiz staple - "on which TV show did Richard Thorncroft insult the entire Isle of Wight?"

Wogan (for obvious reasons) doesn't make a cameo appearance, but Simon Callow does (in possibly the finest performance he's ever given in the company of a Pret A Manger protein pot), and he's among a sea of familiar faces. Mindhorn, you see, Richard Thorncroft, is Julian Barratt. In a script co-written with Simon Farnaby, an actor, long consigned to the accidental casting call of history is given another chance, one that might, just, offer him a path out of bedsit misery and back to the big time.

There's a killer on the loose. He's impossible to catch, making use of the extensive tunnels beneath the island. He's revealed only one weakness, so far - he believes Mindhorn was a documentary.

Shown at Glasgow's 2017 Film Festival, this was introduced as "a cross between Gareth Marenghi's Darkplace and Hot Fuzz" and that's not a bad description but it scarcely does justice to the rambling joy of this keenly observed festival of nonsense.

It's a film feature debut for stage/TV directorial veteran Sean Foley, and it's hard to tell (as with all such apparently collaborative projects) which eye or sense of humour is responsible for what, but things are kept briskly moving, nothing drags, and a confrontation that pits the Brazilian art of capoeira against a gun is a treat. Juggling a mixture of Eighties television sensibilities, post-millennial comedy stylings and the deadly grace of jinga, it's a set piece that demonstrates simultaneously the intent and intensity of Mindhorn's vision.

It's not alone - indeed, conflict is at the heart of the film. Barrat's Thorncroft/Mindhorn has so set himself against the world that vendettas small and large have filled his life. Barrat's co-writer, Simon Farnaby, plays the stuntman Clive Parnevik who replaced Thorncroft when action demanded. Theirs is not the only rivalry. Mindhorn generated a spin-off, Windjammer, and Steve Coogan is at his smarmiest best as a man who puts a key syllable into country club owner. There are strong, even hilarious, performances throughout. Russel Tovey has an important supporting role that's dependent on his wide-eyed charisma, and as both Thorncroft and Mindhorn's love interest (things get reflexively complicated, go with it) Essie Davis is brilliant. At times the only response to this kind of po-faced frivolity is exasperation and while audiences can usually forgive, it can be important for films to give that frustration a voice. There are a few, but they're not all on screen.

There's at least one scene that's informed by the weird datelessness of 1970s civic architecture, and in the film's back and forth with a form of Eighties nostalgia it manages to be a bit casual with its depiction of mental illness in a way that discomfits, and it's a sour note that's important for plot reasons and is used to devastating and hilarious effect. The production design is top notch, managing (with a bit more to play with than mini-polo packets) to simultaneously create and recreate a very particular iteration of a very particular era, and also map its consequences in the modern age in mirrors, in pristine motor cars, in shoes in ageing carrier bags. It's in places reminiscent of Son Of Rambow, a narrative constructed on the basis of memories and false faces, of unreliable reminiscence.

A BBC Films production, it's very firmly in the same tradition of Alpha Papa. In the screening that Eye For Film attended there was raucous laughter throughout. It's perhaps a little self-indulgent in terms of its focus on the business we are told that they call show, but any excesses in that direction are tempered by a pretty convincing portrait of emotional frailty and the masks that even those of us who aren't actors wear.

The comedy is by turns broad and subtle, but Mindhorn also manages to shoehorn in an affectionate tribute to a television show that doesn't exist and a solid dramatic arc about how time and distance change relationships and a murder mystery and a police procedural and a crusading journalist exposé type thing and a buddy action movie and a short play about the value of friendship, and if it were a novel it would probably be described as a series of linked short stories but these are more than sketches, something synthesised, synthesiser driven.

I don't know what co-writing rules Barratt and Farnaby used (the usual joke is that you each do 75 per cent of the work) but they are clearly successful - anyone who's enjoyed anything either has written before will find something here to amuse them. Mindhorn's robot eye can see the truth, and were he to turn that ocular polygraph towards this closing paragraph he would see that it was true (with the proviso that the bit that I am building up to is not really the whole paragraph but this closing sentence) - I laughed and other people laughed and we all kept laughing. You should see this and you will laugh. 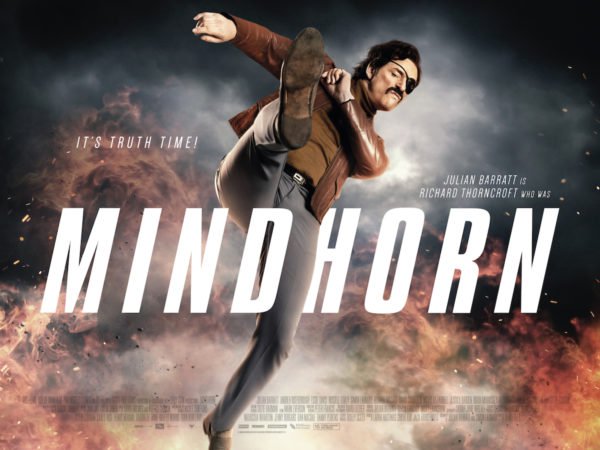 A fading actor aims to redeem himself by turning private eye and catching a killer.