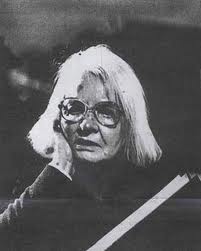 In 1999, Orcadian artist Margaret Tait passed away, leaving behind an extraordinary legacy of work. Her short films were gradually transferred to the archives of Glasgow Women's Library for painstaking restoration work. This documentary looks at the creation of those films, their historic importance, their place in the context of Tait's other creative work, and the woman herself.

It is the latter part that is most challenging, and is where this film has particular importance, given how carefully Tait protected her privacy in life. Reminiscences by her husband, family and friends provide some fresh personal insights, but it's the actresses who worked with her who are able to discuss her method, itself revealing a lot about her character. Similarly intriguing are the props and filming equipment she used, evidencing the limitations within which she worked and the degree of effort required for each project. This, in turn, shows us the importance she attached to capturing what often seem like casual scenes from daily life, even if she never thought of them as having relevance beyond the moment.

All this is interwoven with clips of Tait's work and shots of the Orkney landscape that are dazzling in their beauty. Unfortunately, the sound quality doesn't live up to the images. It's uneven and in places makes it hard to discern what's being said. Ironic given the dificulties Tait herself had in capturing live sound (she generally avoided it), this is a serious problem for what would otherwise be a powerful film.

Despite this flaw and the modesty of its ambitions, Margaret Tait, Film Poet is a must-see film for fans and an interesting curiosity for anyone who wants to know more about the development of the arts in Scotland over the past century.

Reviewed on: 30 Jan 2013
Share this with others on...
A documentary looking back at the life and work of the acclaimed Orcadian creative artist.