Life is hard for Ephraim (Rediat Amare). He recently lost his mother - it is implied that she starved - and his father is worried that if they stay at home, they could go the same way. So Ephraim is taken south to stay with relatives he barely knows, whilst his father goes to Addis Ababa to look for work. The only familiar company the boy has is his beloved lamb, Tsiru. She belonged to his mother and he thinks of her as his dearest friend, but his uncle sees her as the perfect sacrificial meal with which to celebrate Meskel, the Feast of the Exaltation of the Holy Cross. Ephraim is forced to grow up fast as he struggles to devise a way of saving her.

Although the problems Ephraim faces may seem overwhelming to Western viewers, it's worth remembering that lots of things can feel that way to a child. Anyone who remembers what it was like to be that age will be able to relate to his plight. His situation is also complicated by his struggle to live up to his uncle's idea of what a man should be. He's not very strong and struggles to do farm work, but he has his mother's gift for cooking. This wins the affection of his female relatives as surely as it incurs his uncle's wrath. Though it's low status 'women's work', it also proves to be a means of making money - if he can escape the bullies (another universal childhood problem) who try to steal it from him in the marketplace.

Given how familiar all this is, the lack of knowledge that stems from poor education among Ephraim's relatives is occasionally shocking. He and his cousin Tsion (Kidist Siyum) are frequently chided for reading when they could be doing something useful. Tsion's suggestion that the family sell Tsiru and buy cheaper food instead, which will contain at least as much protein, is met with confusion. Her father blames the changing seasons that are causing famine on the anger of God, but she tries to explain to the boy that the problem has been caused by men, without really knowing why. As Ephraim dreams of escaping with Tsiru, Tsion dreams of fleeing to the city and going to college.

Despite the context of drought and famine, Yared Zeleke shows a side of Ethiopia that rarely makes it to the screen, revealing the natural beauty of its green valleys and high mountain pastures. Tsiru is no inbred Western sheep but a mountain animals, agile on the crags, and the boy's feelings for her are clearly reciprocated, suggesting that time was spent in bonding during rehearsals. Amare's performance is a real gem and will appeal to adults and children alike. Appearing in almost every scene, he puts himself through the wringer emotionally but never overplays it, and conveys the complexity of a child coming to understand his surroundings intellectually a well as emotionally.

Thoughtful and moving, with political undercurrents that may prompt viewers to reassess their understanding of the region and the challenges it faces, Lamb is a beautifully observed film with the potential to appeal to a wide audience. 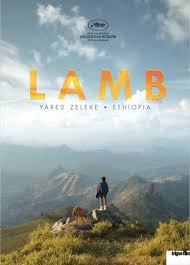 A boy's bond with his pet sheep strengthens after the loss of his mother... but trouble with his relatives brews.