Chilean surrealist director and artistic enfant terrible Alejandro Jodorowsky had a dream in the 1970s. That dream, riding the success of his cult ‘midnight movie’ hits El Topo and The Holy Mountain and backed by Parisian producer Michel Seydoux, was to make a science fiction film like no other. In 1975 - and thus before Star Wars, before the era of CGI, and before $100 million dollar budgets became the norm - Jodorowsky wanted to direct an adaption of Frank Herbert’s novel Dune.

This film was planned on a scale so large that a book of the production sketches and storyboards that Jodorwsky had created to sell the project, and which he shows off in interview segments in this documentary, ran to hundreds of pages and looks like it would sink a bookshelf with its bulk. Inside, are sketches of a film that it seems even modern CGI artists would struggle to render, and today’s studios would be reluctant to budget. In that book, and in Jodorowsky’s mind, is where that version of the film remains. Despite months of prep, no studio would part with the cash to make Jodorowsky’s film. Then Star Wars came out, and the rest is history.

Essentially the highly entertaining story of a giant folly that nonetheless salutes the power of the dreamer (even the mad ones), director Frank Pavich’s documentary is also a reminder that unmade films can have as much impact as real ones. As various talking heads (including Nicholas Winding Refn, who claims to be one of the few to have read the Dune production book) attest, this unmade Dune has become something of a legend in Hollywood and beyond, a concept before its time pointing the way to an alternate history where it, and not Star Wars, pushed the boundaries of what dreams 1970s filmmaking techniques could put on screen.

It helps Pavich’s film hugely that Jodorowsky, amazingly vigorous at 84, is never anything less than captivating, funny, and passionate when on screen. Alternating in interviews between wildly overblown statements about how Dune was going to be the most epic artistic achievement since the Mona Lisa and ranting about the ignorance of pig-headed studio executives, the irrepressible Jodorowsky is the portrait of the artist as his own worst enemy. Though Pavich’s film is sympathetic towards the manic director, there is little doubt that studio executives were not without reason when it came to denying him the presumably dozens of millions he would’ve needed to make such a ridiculously ambitious epic. Jodorowsky himself admits he wanted the film to be 14 hours-plus in running time. He saw himself and his crew, most of whom were assembled seemingly from random meetings in hotel lobbies or at parties, as spiritual warriors on a quest. Casting Salvador Dali as the evil galactic emperor? No problem. Putting his own young son through two years of martial arts training so he could take on the role of Paul Atreides?

A necessary sacrifice of flesh and blood for the god of art. Mick Jagger and Orson Welles were apparently on board at some point. That this ramshackle project might require convincing a skeptical studio to part with its money, and audiences to actually come and see this film, seems to not have featured much in Jodorowsky’s thinking back then. He claims he hadn’t even read the novel when he pitched the idea to Seydoux.

But what dreams the man had! Pavich’s film, through stills and gorgeous animated sequences, takes us inside the Dune book to give us a brief taste of the mind bending tale Jodorowsky was cooking up, with creatures and worlds that looks like they would’ve made Avatar look run of the mill had they been made concrete. The creative team Jodorowsky patched together in his own haphazard way, was a rich one indeed, including artists Moebius, Chris Foss and HR Giger, as well as writer/producer Dan O’Bannon, all of whom would make their mark in Hollywood and international filmmaking later.

Jodorowsky sadly admits that his own failed project in some ways helped sow the seeds of more successful ones, as the creative team he brought together fragmented and later orbited around other endeavours. O’Bannon, broke after selling the shirt off his back to move to Paris to work on Dune, staged a glorious comeback by penning a small science fiction film known as Star Beast with co writer Ron Shusset. Sold to Twentieth Century Fox, the project became Alien, whose creature was designed by none other than Dune fellow traveller HR Giger. Jodorowsky and Moebius recycled many of their original concepts in their long-running Incal comic-book collaborations.

Whether or not you feel Jodorowsky’s unmade film would’ve been an epic success or sunk a studio, Pavich’s film is a highly enjoyable romp through the history of one of Hollywood’s great ‘what ifs?’. 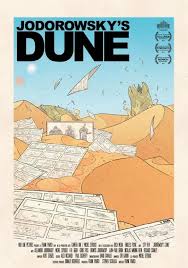