Horror is a tricky genre to hack, partly because audiences may feel they have seen it all before.

David Robert Mitchell manages to confound expectations by springing an original premise and then won’t let go. His latest film is genuinely gripping and gruesome even as he ticks many of the horror film boxes and references John Carpenter's Halloween along the way.

The opening in which a girl is seen running in high heels from her house to meet a grisly fate (unseen) serves to unsettle the atmosphere. The next day she is found murdered and dismembered.

Mitchell then introduces 19-year-old Jay (Maika Monroe), her friends and siblings. Like any other teenage girl in a middle-class neighbourhood, she is looking forward to a date with her boyfriend Hugh although the evening ends in a particularly nasty manner – and she arrives home in tears.

Sex with Hugh has made her the victim of “a wandering curse”. Hugh was afflicted and has passed it on by intercourse. There are demons out there lusting for her life and she is forever looking over her shoulder to check who is following her. They appear in different guises, including a naked woman and a child.

She enlists the help of her close circle who cannot see the visions of her torment, but together they set off on a road trip to out-manoeuvre the demons. Chance, of course, would be a fine thing.

Mitchell who made the charming coming of age tale The Myth Of The American Sleepover in 2010, suggests that what he had in mind was “Some kind of a mental and physical chain that would connect people. By having sex with someone, you suddenly become linked to the people that person had sex with before.”

The narrative, which eases under your skin inexorably, culminates in a powerful finale in a deserted swimming pool all set to a pulsating electronic score by Rich Vreeland. 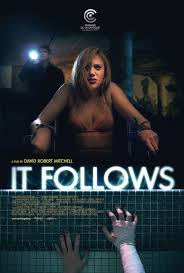 A teenager finds herself having strange visions and becomes convinced that something dangerous is following her.