Though rates of alcohol consumption in Greenland have declined from their peak in the Eighties (when they were double those of Scandinavian countries), binge drinking remains a big problem in the Arctic nation, and suicide rates are shockingly high. They're the same symptoms that have been seen in many a population when its traditional culture has collapsed and employment prospects ave been poor. For those from the north of the country who are now living in urbanised areas, there's another problem - a difficulty in adjusting from those wide open horizons to small, enclosed spaces. An adjustment which other nations went through over centuries has been thrust upon Iceland in the course of a few decades, intensified by the shrinking of the ice, which is making the traditional way of life increasingly dangerous. Several films and books have already explored this subject; this one looks at its impact on the young.

Inuk (Gaba Petersen) lived in the north as a child and saw his father die by falling through the ice - just dropping out of sight in that wide, white world. Now he lives in the city where his mother and stepfather drink heavily and beat him. He has very ordinary teenage concerns - he likes hanging out with his friends, he's in a band - but at night he walks the streets and breaks into cars to find somewhere warm to sleep. A social worker who has seen it before sends him north to a home for troubled teenagers, and from there he is seconded onto a hunting trip to far off Seal Bay.

Heading up the trip is seasoned hunter Ikuma (Ole Jørgen Hammeken), who is famous for having killed a polar bear, though that story isn't quite what the young people expected. He has ghosts of his own to deal with and he doesn't like babysitting. Inuk feels stupid in the furs he's given and sulks for much of the way out. But when Ikuma sees a tool Inuk was given by his father, and understands the boy's roots, the two begin to bond. It's a relationship that will not develop smoothly. Both of them are damaged. This is an environment that does not forgive mistakes. A momentary loss of control could mean ending up in the freezing water below, with little hope of survival. But when he learns to guide the dogs, how to cut ice and how to cope with harsh weather, Inuk begins to feel alive.

Part drama. part folk tale, this is a film that was made with the participation of local people. Some of the skills on display take years to perfect so would not really be feasible for professional actors. This gives it a documentary quality as it captures an endangered way of life, and the threat to individuals is mirrored in the threat to the landscape. Although the story is simple, its themes are powerful and it speaks with a clear voice of its own. There are no weak links in the cast and Xavier Liberman and Franck Rabel's cinematography brings out the complexity of the frozen world. The result is an intriguing and genuinely moving film that audiences all around the world can connect with.

Inuk is now available to download on iTunes, Amazon Video and Google Play. 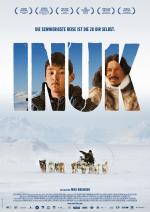 A boy who has lost his father learns the skills he needs to survive on the ice.

Atanarjuat, The Fast Runner
Qimmit: A Clash Of Two Truths
Village At The End Of The World