Incident In A Ghostland

I've written before on the dangers of moving house in horror films. Inheriting a house is even worse. Even children's films like The Spiderwick Chronicles offer a warning - consider the likes of Thirteen Ghosts, The Beyond and The Curse Of Sleeping Beauty and you'll know it's something to be seriously wary of. Pauline (former pop star Mylene Farmer) and her two daughters arrive at their new remote woodland home in the middle of the night after what has already been a stressful journey. Beth (Emilia Jones) has been reading out her Lovecraft-inspired fiction in the car. Vera (Taylor Hickson) has been bitching at Beth and sulking about the boyfriend she was forced to leave behind. They've nearly been run off the road by the unaccountably aggressive driver of an ice cream truck, and they've just discovered that the area is being troubled by a serial killer who murders parents and then tortures teenage girls. It's the kind of occasion when you just want to pack the kids off to bed and have a cup of tea and a nice sit down - subsequently having to deal with a couple of intruding psychopaths is a bit much.

Beth is still troubled by that night years later, when she's sitting in an office whose walls are covered by her framed book covers, wearing her writer's glasses, slicking back her writer's hair, smiling at her doting husband and somehow getting away with producing her manuscripts on a typewriter. That something is amiss here is immediately apparent, even before she gets a call from her panicked sister, necessitating a return visit to that house where Pauline and Vera still live. Vera has apparently suffered lasting psychological damage and frequently suffers from panic attacks. But there's more going on here than meets the eye.

As every would-be writer has to learn, there are times when an otherwise very satisfying story has to be savagely cut back because it simply doesn't make sense. The twist in Pascal Laugier's narrative is undermined by plot holes so large you could drive an ice cream truck through them, and the frankly silly ending only makes things worse. But what Laugier lacks as a writer he makes up for as a director, aided by some high quality costuming and set design. It's possible that Incident In A Ghostland is trying to say something clever about PTSD or pathological denial, but it's best approached as a mood piece, admired either for is nastiness or its prettiness, and not considered too deeply.

That prettiness is of the Gothic variety, though ironically, like the persistent references to Lovecraft, it's all style and no substance - there is no Gothic storytelling here and the horror is of a much more mundane variety. Our two villains, one a tall thin androgyne and the other an oversized lunk with the mind of a child (yes, really) have no apparent motivation beyond the pleasure they take in mistreating young women, which is itself too commonplace a proclivity to substitute for a personality. They're not particularly creative in how they go about it, which means that, with a limited number of possible victims available, there's not a great deal to keep one watching..

Liable to thrill doll fetishists but do little for anybody else, this film tempts viewers in with Laugnier's obvious talent behind the camera but falls short of its potential. 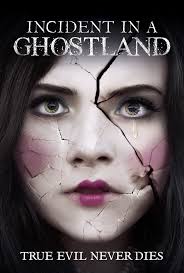 A mother of two who inherits a house is confronted with murderous intruders on the first night in their new home and fights for her daughters' lives. Sixteen years later when the daughters reunite at the house, things get really strange.