Depression is an illness. Or so they say. Depressing movies about dysfunctional people are real. Or so they believe.

Questions remain, however. Feel good or feel bad? Syrup or vinegar? There is a middle ground, naturally, between hope and suicide. It is in the courtyard.

Antoine (Gustave Kervern) is a singer who walks off stage in the middle of a set and never goes back. This is either a mid life crisis or a mental breakdown. He is 40, overweight, bearded and as passive as a hedgehog.

After weeks slobbing in a filthy room with the curtains drawn, he returns to the world of ordinary misery and, with the help of a stranger, procures a job as caretaker in a tall apartment block. He appreciates the anonymity but finds that his personality attracts the defeated and the friendless.

When asked for a favour he tries to refuse but no one listens. Things are dumped on him, like a dog and Mathilde (Catherine Deneuve), who lives on the top floor.

She has recently retired and is flailing about trying to find something to do. Her husband thinks she's going barmy and threatens the looney bin ("He's a former Stalinist," she explains), which is why she finds Antoine's company so restful. He doesn't complain; he hardly speaks. Perfect!

The film fills its empty spaces with characters who, in one way or another, are lost and drifting. Like the ship of fools their future can only end in shallow water. Where is the plot? What is the hook?

The Antoine/Mathilde affair is more a healing of souls than a middle aged passion. Deneuve portrays the panic of a recovering workaholic extremely well and Kervern achieves something rare amongst actors, the ability to hide in plain sight

The entertainment value may be low but writer/director Pierre Salvadori does not falsify the unenviable truth that age isolates rather than embraces. 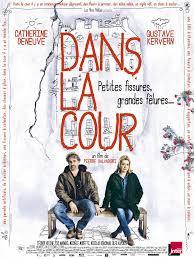