Sometimes there's just no telling what will make a successful film. Even by Eighties standards, Highlander has an exceptionally silly plot. With only one established star, pitiful special effects and leaden dialogue, it unsurprisingly opened to mediocre box office, but it has gone on to become a cult favourite with remarkable staying power.

The story centres on (French accented) Scotsman Connor MacLeod (Christopher Lambert). Born in 1518, he doesn't seem particularly remarkable until he mysteriously recovers from a battle wound that should have killed him. Exiled from his clan (but somehow settling in a castle and making enough of a living for quite a few luxuries), he meets a (Scots-accented) Egyptian (by way of Spain and several redrafts) played by Sean Connery, who tells him that he is an immortal contestant in a mysterious game that involves men scattered across the ages trying to cut off one another's heads. Among these men is the Kurgan (Clancy Brown), a ruthless warrior who, initially thwarted, ends up following Connor all the way to Eighties New York to try and finish the job.

Following a series of increasingly weak sword and sorcery films, Highlander cannot be faulted for its boldness, trying to reinvent the genre by dragging it kicking and screaming into the modern age. Told through interwoven flashback scenes and present day action, it situates fantasy alonside latter-day noir. Director Mulcahy milks the cliches of both genres but gets away with it better than you might expect, largely thanks to the energy and confidence of his approach. His fast-cutting style really stood out in its day, though it's less impressive now. Unfortunately the film's hook is in its fantasy premise and the Eighties scenes never quite live up to the medieval ones. Connor's 16th century romance may be twee but it carries some emotional weight; his relationship with later heroine Brenda (Roxanne Hart) is utterly lacking in chemistry. The swordplay is impressive and well-choreographed throughout but in the dark, blue-filtered urban locations it loses its edge, resulting in an underwhelming final battle.

Key to the film's success is its casting. Fresh from Luc Besson's cult hit Subway, Lambert brings an edgy presence to the lead role. His acting is not exactly refined but he's intensely watchable, whether in action or sizing up his foes with a stare he later put down to being short sighted and robbed of his glasses on set. He's ably matched by the inimitable Brown, who makes no attempt to pretend this is a serious film and throws himself into the villain's part with exuberant relish. It's a rare actor who can be that OTT and yet genuinely scary at the same time, but Brown, convincingly unhinged, pulls it off.

Wrapped around this is an orchestral score that swerves off from time to time into specially written Queen songs, making this a must for fans of Freddie Mercury et al. They fit the story of the film well but often jar with the tone and have come to add to the film's datedness - yet this quintessentially Eighties approach now makes Highlander an intriguing curiosity. Storywise it doesn't bear much thought; as a piece of film history its transitional status makes it interesting; as fantasy romps go, you could do a lot worse. The sequels did. 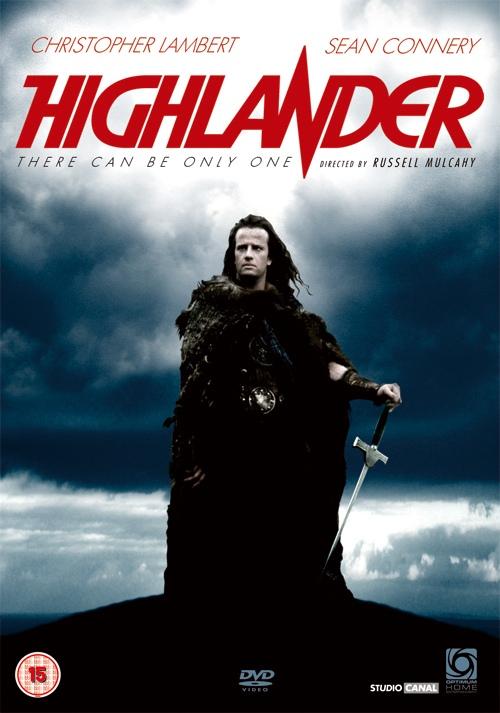 Immortal warriors compete in a game of decapitation with only one possible survivor.